Screenwriter Dalton Trumbo’s acclaimed career comes to a crushing halt in the late 1940s when he and other Hollywood figures are blacklisted for their political beliefs. 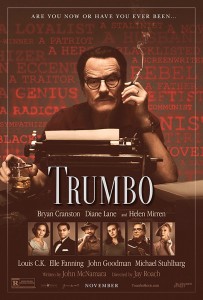 The real-life Niki Trumbo has high praise for Elle Fanning, the then 16-year-old actress who portrays her in a startlingly mature performance that takes the character from age 13 to 31. She and Fanning exchanged many emails during filming.

Screenwriter John McNamara first heard the story of Dalton Trumbo when he was studying screenwriting under formerly blacklisted scribes Ring Lardner Jr., Waldo Salt and Trumbo supporter Ian McClellan Hunter. “I told Hunter how much I enjoyed his screenplay for Roman Holiday,” McNamara says. “He told me that he didn’t write the script. Dalton Trumbo did.” McNamara saw an opportunity to create a film that could encapsulate the turbulent politics of that volatile era in American history in a personal story. “It’s that rarest of things – a true story with a happy ending,” he says.

Reading that short, poignant essay, entitled “A Different Childhood,” McNamara realized he had been seeing his subject as a writer and a political activist, but he had no idea of the man. Eventually McNamara reached out to Niki Trumbo to get her insights and her opinion of his work-in-progress. “She wrote back the most gracious email with very specific critiques of the script in general and her character in particular. ” Niki Trumbo and her younger sister Mitzi became integral to the creation of the script. Niki is still fiercely proud and protective of her father’s legacy.

At Groundswell Productions, excitement was building for the project. “It’s one of the best scripts we ever read,” says producer Janice Williams, the company’s president of production. Director Jay Roach was tapped to helm the film early in the development process.  ShivHans Pictures founder Shivani Rawat was drawn to the project by the incredible story and Jay Roach and Groundswell Productions’ involvement. “As soon as I read the script, I knew we had to make this film,” she says. According to Mitzi Trumbo, Roach listened carefully to what the sisters had to say and made a number of adjustments to the script based on their input.

“Dalton Trumbo is a very complex character,” says producer Janice Williams. “Extremely wealthy, living the Hollywood dream … and a communist. We had all been watching Bryan Cranston evolve as Walter White in ‘Breaking Bad,’ and we felt there was something in his performance that was the epitome of what we needed. Bryan is able to play contradictory characters with ease.”

After reading the script, Cranston decided that this was a project he could not wait to get involved in. “Jay Roach provided such passion and guidance,” the actor says. “It has a strong script and a compelling story. It is thrilling and thought-provoking from an intellectual standpoint. That attracted me and it attracted a cast that includes Diane Lane, Helen Mirren, John Goodman, Michael Stuhlbarg and Louis C.K., because we wanted to be part of something important.”

Trumbo’s wife Cleo, a former child performer who supported her mother and brother as a youngster, was by all accounts a force to be reckoned with. Diane Lane, who plays Cleo, embodies that kind of smart and sophisticated Hollywood woman.

The dazzling world of Old Hollywood comes alive again through a wide variety of Louisiana locations that stand in for mid-century Los Angeles from the 1940s through the 1970s. Trumbo was shot in 41 days: 40 in and around New Orleans and one in Los Angeles.

Other locations include the historic Longue Vue House, a New Orleans Classical Revival landmark transformed by Ricker into multiple settings including studio head offices; the homes of both Hedda Hopper and Edward G. Robinson; Hollywood’s historic Roosevelt Hotel, where John Wayne addresses a meeting of the Motion Picture Alliance; the 1927 Saenger Theater, which hosts the premieres of Roman Holiday and Spartacus; and the U.S. Customs House, a landmark federal building used for a bittersweet scene between Arlen Hird and Dalton Trumbo, as well as the start of the infamous court hearings.