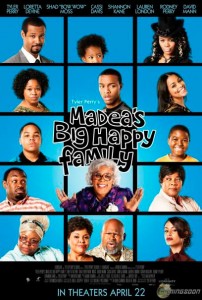 MADEA’S BIG HAPPY FAMILY marks Perry’s eleventh film production in approximately six years. In that short span, he’s outpaced every other writer/director making films for theatrical release, produced hit television shows and built his own 200,000 sq. ft. studio facility in his hometown of Atlanta. But as the latest work in a steady stream of entertainment emerging from Tyler Perry Studios, MADEA’S BIG HAPPY FAMILY holds special significance for the film magnate. “I wrote the play that the movie is based on as an homage to my mother who had passed away,” explains Perry. “Now I’m just really excited about having an opportunity to use this movie as my instrument to get through my own grief. Writing this story has helped me a great deal. And to be able to use something so tragic for me and pass it on to someone else and make them laugh, I have joy. It’s a good feeling.”

Madea, everyone’s favorite wise-cracking, take-no-prisoners grandma, jumps into action when her niece, Shirley, receives distressing news about her health. All Shirley wants is to gather her three adult children around her and share the news as a family. But Tammy, Kimberly and Byron are too distracted by their own problems: Tammy can’t manage her unruly children or her broken marriage; Kimberly is gripped with anger and takes it out on her husband; and Byron, after spending two years in jail, is under pressure to deal drugs again. It’s up to Madea, with the help of the equally rambunctious Aunt Bam, to gather the clan together and make things right the only way she knows how: with a lot of tough love, laughter…and the revelation of a long-buried family secret.

With MADEA’S BIG HAPPY FAMILY, Perry hopes audiences will be moved – by both laughter and tears – to live authentically and to embrace the simple act of loving as fully as possible. That, he says, is the key to any family’s survival. “No matter what’s happening in your life, no matter how tragic, live the best life you can. That’s the message,” he says. “You know, live a life for God, live a life giving love, live a life sharing love, as Shirley did in the movie. And your children, no matter how far they stray, will come back to what they know.”