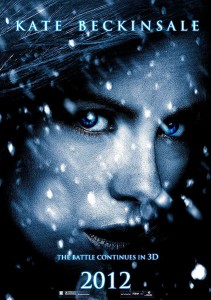 Kate Beckinsale, star of the first two films, returns in her lead role as the vampire warrioress Selene

Måns Mårlind and Björn Stein are directing the film with a screenplay by Len Wiseman, John Hlavin, and Allison Burnett. Tom Rosenberg, Gary Lucchesi, Len Wiseman, and Richard Wright are producing the film with David Kern, David Coatsworth, Henry Winterstern, and Skip Williamson serving as executive producers. Kate Beckinsale will reprise her role as Selene from Underworld and Underworld: Evolution, while Sandrine Holt, Michael Ealy, and India Eisley have been cast in roles new to the series. Filming began in March 2011 in Vancouver, British Columbia.

Beckinsale is back as the vampire Selene for Awakening, as she escapes from her comatose imprisonment to find that humans have discovered that vampires and werewolves exist and are trying to wipe them out. Selene then teams with a police detective (Michael Ealy) to bring down the evil BioCom corporation.