Ushering in a new era of horror, Unfriended follows what happens when a seemingly innocent online prank starts a sequence of events that spirals out of control. A first-person exploration of the terror that can emerge when our connected experiences transform into our deadliest fears. 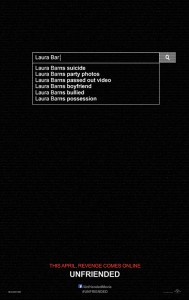 The only contact that the cast had with the outside production was via the actual desktop and the earpiece. A result was that they would sometimes forget they were on a movie set, which allowed them to embrace the organic nature of the project.

Producer Timur Bekmambetov’s penchant for innovative, intelligent and sophisticated filmmaking elevates the horror genre to an unexpected level with Unfriended. A filmmaker who splits his time between the U.S. and Russia, running companies in both countries, Bekmambetov is almost always on his computer, which is how the idea for Unfriended came to life. For 15 years, the thought kept coming
up: “Somebody’s got to make a movie about the part of our lives we spend digitally connected.”

Jason Blum, the film’s executive producer whose company, Blumhouse, is presenting the film, said about the idea: “What is so fun and scary about Unfriended is that the filmmakers came up with a new way of making a movie that actually elevates and serves the story.”

One night, writer/producer Nelson Greaves and coexecutive producer Alan Khamoui, another executive from Bekmambetov’s production company, Bazelevs, were sitting around the office spitballing ideas for new projects with their boss, and the idea for Unfriended came back around.

After getting the thumbs-up from director Leo Gabriadze, Greaves reached out to a former classmate and roommate, Adam Sidman, who was working in unscripted television production. As soon as Greaves walked him through the story line, Sidman came aboard and wore every production hat possible—production coordinator, locations manager, hiring the crew, director of photography, creative producing, you name it – and Sidman, Greaves and Gabriadze shot a test of the script. Soon after, Bekmambetov gave it his seal of approval and green-lit production.

The principal cast of Unfriended consists of six characters. Working on tight time constraints, casting director John McAlary brought talented actors in for auditions. In the beginning, the team had actors read in the room with them, but it soon became quite clear that they needed to audition in front of a computer. So, the casting process took place just that way, in two different rooms, via video chat, and the cast was chosen based upon those auditions.

In auditioning actresses for the role of Blaire, the team knew the moment they saw Shelley Hennig that she was their Blaire. She shares: “The audition was totally unconventional, compared to other projects I’ve auditioned for. I was in an office, Skyping with an actor in a separate room,”

As they never actually make physical contact throughout the film, it was important that Blaire and Mitch have palpable chemistry. After seeing several actors for the role of Mitch, the core team found him in Moses Storm. Renee Olstead, known for her co-starring role on the critically acclaimed coming-of-age series The Secret Life of the American Teenager, landed the role of the lovable-but-dim-witted Jess.

Before principal photography began, the cast rehearsed at Bekmambetov’s Bazelevs production offices, sitting in a circle and going through the script. The way the film was shot, the cast members were completely separate from one another, each operating from a desktop in a separate room in a house in Santa Clarita, California.

The house, located in Santa Clarita, California, is an actual residence. During their search, Greaves and Gabriadze knew they had to have a place that could accommodate the crew, as well as have separate rooms for each cast member. To create the illusion that each room was in a different location in the teens’ fictitious town, these rooms needed to be designed differently. As the production’s man of many talents, Sidman worked with production designer Heidi Koleto to take the lead on locations and find the perfect house.

The filming of Unfriended is unconventional in that each cast member was his or her own camera operator. Each was individually recorded by the GoPro attached to his or her computer. The key to bringing the vision of Unfriended to the screen was in the editing hands of Laramie and Wesman.