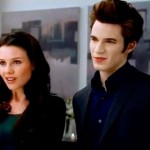 Vampires Suck was released on August 18, 2010 in the United States and Russia, August 26 in Australia and will be released on October 15 in the United Kingdom. 20th Century Fox did not provide advance screenings of the film for critics.

Becca Crane (Jenn Proske) moves to Sporks to live with her clueless father, Frank (Diedrich Bader), after her mother starts an affair with Tiger Woods. She is quickly befriended by many students at her new high school, but she is intrigued by the mysterious and aloof Edward Sullen (Matt Lanter), who perplexes her during their time in biology. Later, Becca is nearly struck by a van in the school parking lot.

Edward inexplicably moves from several feet away and stops the vehicle with a student without any harm to himself or Becca. He later refuses to explain this act to Becca and warns her against befriending him. After much research, but reaching the wrong conclusion that he is a Jonas, Edward corrects her saying he’s a vampire, though he only consumes animal blood.

The pair fall in love and Edward introduces Becca to his vampire family. While unwrapping a gift, Becca gets a paper cut, causing Edward’s family to relapse by her blood’s scent and attempt to kill her. Realizing the danger that he and his family pose to Becca, Edward ends their relationship while saving her from the one of the three nomadic vampires who have been killing humans, Jack (Charlie Weber), knocking his head off with a baseball bat.

Edward’s departure leaves Becca heartbroken and depressed for months as she discovers that thrill-seeking activities evoke Edward’s preserved image. She is also comforted by her deepening friendship with Jacob White (Christopher N. Riggi), the cheerful childhood friend who eases her pain over losing Edward. But due to his strange puberty, Becca discovers he has become a werewolf as his pack arrive to maul another of the nomadic vampires.

Through a series of miscommunications, Edward believes Becca has killed herself and attempts to provoke the “Zolturi” — a powerful vampire coven capable of killing him — by exposing himself in the sunlight at the site of the school prom. Becca rushes to the prom in a Porsche 911 to save Edward. Upon arrival, she is slowed down during the warring factions of Edward fangirls and Jacob fangirls and thus barely able to stop him.

Vampires Suck has received overwhelmingly negative reviews from critics,  with the consensus being “Witlessly broad and utterly devoid of laughs, Vampires Suck represents a slight step forward for the Friedberg-Seltzer team.”

The review by Peter Travers of Rolling Stone was only four words long, which simply stated “This movie sucks more.”