Clueless director Amy Heckerling and star Alicia Silverstone reunite in Vamps, a cheeky, fresh comedy about two eternally young party girls navigating the dating world in the Big City. Goody (Silverstone) and Stacy (Krysten Ritter) are addicted to night life, clubbing, hooking up and always looking for the next thrill, all the while keeping a big secret, they happen to be modern-day vampires. 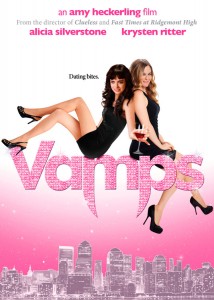 With their destinies at stake, the girls are faced with a difficult choice; give up their eternal youth for a chance at love, or continue to live their uncomplicated fabulously single lives forever.

Amy Heckerling and producer Lauren Versel had known each other in Los Angeles many years before they met again, by chance, at a dinner in 2009. The organizer of the event was Lauren’s longtime friend Johanna Went – wife of eventual Vamps producer Stuart Cornfeld – and it was at Johanna’s dinner that Amy introduced Lauren to the project. Falling in love with the prospect immediately, Lauren was shown the script that Amy had written and, upon seeing the richness of Amy’s vision, proposed that they make the project together as an independent film. Enticed by the possibilities, Amy agreed.

At the end of 2009, the production team was ready to assemble their cast. Krysten Ritter was the first attached to the project in November. Soon after, Sigourney Weaver expressed her interest in the project, and was cast as the ruthless and ancient “stem” vampire Cisserus. Amy and Lauren had recently seen Clueless star Alicia Silverstone on Broadway in “Time Stands Still,” and were impressed by her performance.

As the cast continued to grow more star-studded, Amy Heckerling, a long time Clockwork Orange fan, fulfilled a dream of hers with the chance to work with Malcolm McDowell for the role of Vlad. She and Lauren were both thrilled to work with someone whose work they revered for decades.