Waiting for “Superman” is a 2010 documentary film from director Davis Guggenheim and producer Lesley Chilcott. The film analyzes the failures of the American public education system by following several students as they strive to be accepted into a charter school. 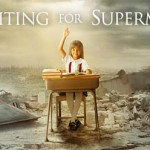 Waiting for Superman is a 2010 family documentary film from director Davis Guggenheim and producer Lesley Chilcott. The film analyzes the failures of American public education by following several students through the educational system.

Geoffrey Canada describes his journey as an educator and his surprise when he realizes upon entering adulthood that Superman is a fictional character and that no one is powerful enough to save us all. The film’s title is based on an interview with Geoffrey Canada wherein he recounts being told (as a child) by his mother that Superman was not real, and how he was frightened because there was nobody to save him.

Throughout the documentary, different aspects of the American public education system are examined. Things such as the ease in which a public school teacher achieves tenure, the inability to fire a teacher who is tenured, and how the system attempts to reprimand poorly performing teachers are shown to have an impact on the educational environment. Teaching standards are called into question as there is often conflicting bureaucracy between teaching expectations at the school, state, or federal level.

The film also examines teacher’s unions. Michelle Rhee, the former chancellor of the Washington, D.C. public schools (the district with some of the worst-performing students at the time), is shown attempting to take on the union agreements that teachers are bound to, but suffers a backlash from the unions and the teachers themselves.

Statistical comparisons are made between the different types of primary or secondary educational institutions available: state school, private school, and charter school. There are also comparisons made between schools in affluent neighborhoods versus schools in poorer ones. Since charter schools do not operate with the same restrictions as public institutions, they are depicted as having a more experimental approach to educating students.

Since many charter schools are not large enough to accept all of their applicants, the selection of students is done by lottery. The film follows several families as they attempt to gain access to prominent charter schools for their children.