A woman with borderline personality disorder (Kristen Wiig) wins the Mega-­‐ Millions and—much to the dismay of her parents, therapist, gay ex-­‐husband and local TV station—uses the winnings to fund her lifelong dream of becoming the next Oprah. 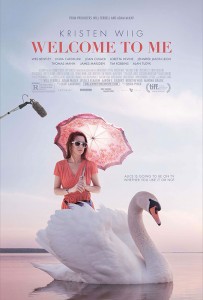 Welcome to Me was shot on location in Los Angeles over a 5 week period in August 2013.

When Eliot Laurence was inspired to start writing the project, he originally envisioned a television pilot detailing the life of a complex woman and the strikingly intimate television show she creates about herself. He wanted to incorporate the “incredible level of narcissism in our culture, with Twitter posts and Facebook updates about what kind of coffee you just got” and reflect that through the character of Alice, a woman who is so self-­‐obsessed that she creates a television show, “Welcome To Me,” dedicated entirely to herself.

When he showed the work-­‐in-­‐progress to his longtime collaborator Shira Piven, she immediately fell under the spell of the offbeat story. Enamored by its Charlie Kaufman-­‐esque tone, Piven requested Laurence adapt the story into a feature film, with herself on board as the director.

Piven and Laurence’s first task in making Welcome To Me was to find an actress able to bring the eccentric character to life and Kristen Wiig was their first choice. With the help of Producer Jessica Elbaum, Wiig received the script and immediately fell in love with it and looked forward to the challenge of playing Alice.

Wiig’s casting as Alice was the key to moving the project forward, and, as Laurence says “changed everything.” The star-­‐studded ensemble was quickly cast with a plethora of Hollywood’s most talented actors, including Tim Robbins as Alice’s disapproving psychiatrist; Joan Cusack as her harried talk show director, and Wes Bentley as her love interest. James Marsden, Alan Tudyk and Jennifer Jason Leigh round out the cast.

Behind the scenes, the prolific cinematographer Eric Edwards (Knocked Up) signed on as the Director of Photography. One of the key elements in creating the world of “Welcome to Me” were the “re-­‐enactments,” which are segments depicting pivotal moments from Alice’s childhood and teenage years that she hires actors to dramatize as part of the talk show within the movie. Piven acknowledges that shooting these key sequences was tricky, considering the film’s limited budget.

By the end of the film, viewers will cringe at the actions of the often clueless-­‐sometimes-­‐ malicious Alice, but they will also find themselves relating to her. Jessica Elbaum points out that after all, “there is a little piece of Alice Klieg in everybody.”