Wallace (Daniel Radcliffe) is a medical school dropout who‘s been repeatedly burned by bad relationships. While everyone around him seems to be finding the perfect partner, including his friend Allan (Adam Driver) in girlfriend Nicole (Mackenzie Davis), Wallace decides to put his love life on hold. It is then that he meets Chantry (Zoe Kazan), an animator who lives with her longtime boyfriend Ben (Rafe Spall). 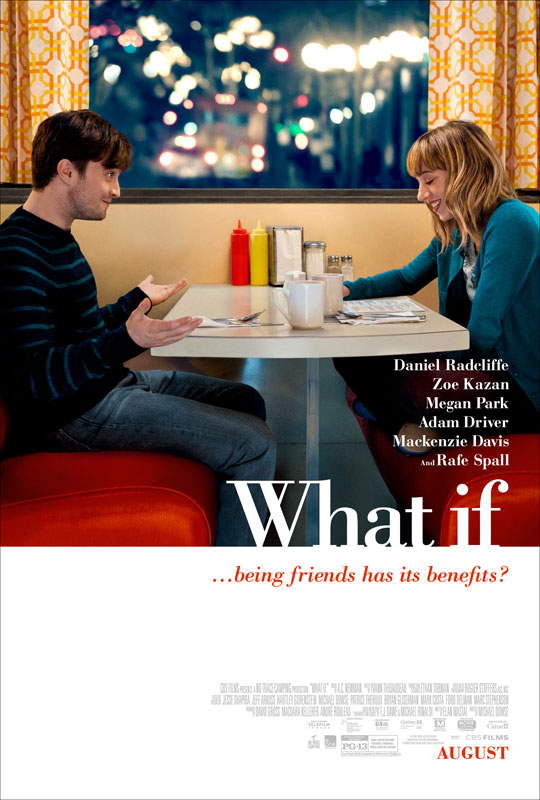 The beach is the setting for one of the funniest set pieces in the film, a midnight skinny dipping romp for Wallace, Chantry, Allan and Nicole. Davis, who plays Nicole, says the production had many fun and memorable moments but if she had to single out one, it would be that scene.

When Screenwriter Elan Mastai saw the production of  Toothpaste and Cigars‘ at the Fringe Festival in Toronto, he felt inspired to write a script based on the play. “The difference between adapting a novel is that with a novel you‘re always paring down but with a play/short story you get to add. It was that way with this script. There was a lot of room for me as a writer to add my own ideas. I took the play, expanded it and added characters.”

After being chosen for the coveted Black List, the screenplay was picked up by David Gross and Jesse Shapira at No Trace Camping. They gave it to director Michael Dowse, who loved it upon first read and jumped on board immediately. Although Dowse had never done a romantic comedy before, he‘s always appreciated the genre and jumped at the chance to shift the paradigm.

Daniel Radcliffe relates to the character of Wallace as well as the wit and heart of the story. “One of the reasons I was so keen to make this film is in a part of the script Wallace corrects Chantry on her pronunciation of a word. At that point I knew I liked this guy,” says Radcliffe of his character.

Zoe Kazan, a successful screenwriter in her own right, was immediately attracted to the comedy and sentiment in Mastai‘s script. Mackenzie Davis plays Allan‘s passionate girlfriend, Nicole. Davis says the atmosphere on set was so relaxed and convivial that it was a bit like summer camp where the cast got to shoot scenes that were party scenes or skinny dipping at the beach scenes that were for the movie, but were also really fun and memorable moments.

The idea of using animation in WHAT IF started for a practical reason – because there is so much dialogue in the story, Mastai also wanted to bring something visually distinctive to the movie. Additionally, because of Chantry‘s romantic circumstances, there were emotions she couldn‘t express aloud.  “There were things in the film that Chantry couldn‘t say, not because they‘re secrets but because she‘s not ready to admit them, even to herself“,says Mastai. ―”Writing the animated scenes allowed me to showcase her unexpressed inner thoughts in a visually arresting and metaphoric way.”

The production team enlisted the talents of production designer Ethan Tobman to create the environments where the characters would live. The three main interiors include Wallace/Ellie‘s house, Chantry/Ben‘s apartment and Allan‘s house. The design concept around these three sets was to create a triumvirate of the three stages of the character’s maturation.

The setting for much of the film is Toronto. Although it‘s not a place traditionally thought of as a romantic location, Dowse found ways to make the city look as nice and beautiful as possible.  “It was kind of a challenge to make Toronto romantic,” he says. “It‘s normally been quite a gray, sort of austere city, and, like, David Cronenberg and Atom Egoyan‘s works, very, sort of, cold. But, the thing about Toronto is that there‘s a ton of water around it, and that‘s sort of something we try to key into is, try to find the romance by the beaches, and in the east end of the city, and, and try to capture it that way, to give it its due as a modern cosmopolitan city.”

Although most of the film was shot in Toronto, the company did go over to Dublin for four days at the end of the shoot, for the scenes when Ben is working in Ireland.