In the nail-biting thriller, When the Bough Breaks, wannabe parents John and Laura Taylor (Morris Chestnut and Regina Hall) find out how a lullaby life can quickly become a waking nightmare. Young, professional, and successful, the Taylors desperately want a baby to make their picture perfect family complete. After exhausting all other options, the ideal woman walks into their life: Anna (Jaz Sinclair). She’s undeniably beautiful, friendly, and ready to be the Taylors’ surrogate. They immediately hire her, and take her under their wing. 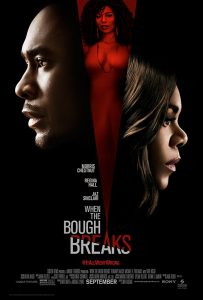 Jack Olsen’s screenplay for When the Bough Breaks – combining the psychological suspense of romantic obsession with the dramatic peril of a family brought to the brink – first caught the attention of Producer Bob Shaye. Shaye’s producing partner Michael Lynne got hooked on the idea that what expectant parents John and Laura Taylor go through before the danger kicks in is relatable and modern.

When Lynne, Shaye, and Screen Gems president Clint Culpepper got to work assembling the perfect team to bring When the Bough Breaks to life, they found the ideal director in Jon Cassar, who turned “24” into one of television’s great action series, and also helmed the acclaimed miniseries “The Kennedys.” “We needed someone that was going to be able to pull off this ambitious shoot in under a 35 day shooting schedule,” explains Shaye. “Jon is possibly the perfect director for a thriller. He’s efficient, enthusiastic, and passionate.”

When Cassar first read Jack Olsen’s screenplay, he was intrigued by the dark psychological and legal complexities layered into the thriller, and immediately hopped on board. “This is a thriller about a couple that can’t have a child naturally and so they decide to use a surrogate,” explains Cassar.

With Jon Cassar fully committed, he brought on cinematographer David Moxness to join his team behind the camera. Having worked together on various productions (“The Kennedy’s,” and “24”) since 1989, Jon knew he could trust “Mox” to help create the most visually alluring thriller possible. The rest of the production family joined on board shortly after, including production designer Chris Cornwell and stunt coordinator Lance Gilbert.

For Chestnut, who plays high-powered lawyer John Taylor, what drew him to the pageturner of a script was the chance to be in an exciting thriller that dealt with the legal complications and emotional struggles surrounding a couple trying to complete the picture of an ideal family. For co-producer Valerie Bleth Sharp, who had collaborated with Chestnut on The Perfect Guy and Think Like a Man, the actor was the perfect choice.

Rounding out the power couple pushed to the breaking point in When the Bough Breaks is Regina Hall as superstar chef Laura Taylor. When the Bough Breaks marks Hall’s and Chestnut’s fifth collaboration on a film together, and Hall was thrilled to jump on board. “We’re like one big happy family,” laughs Hall. “Morris and I work so well together, he’s just amazing.”

When it came to casting Anna, whose twisted psychology sparks the movie’s thriller plot, finding the right actress was essential because of the character’s intricacies. Luckily, the filmmakers landed Jaz Sinclair, the magnetic spitfire from Dallas, Texas who brought to life an alluring type of manipulative villainy.

Theo Rossi, who was cast as Anna’s scheming boyfriend Mike, says what Sinclair is doing is “not just a look, it’s an attitude. The one thing that Jaz has that you almost wish a lot of actors had is everything plays in her eyes. Her eyes tell you the whole story and that’s really important, especially for this role.”

When the Bough Breaks marks production designer Chris Cornwell’s eleventh film with Screen Gems. Having collaborated with producers Valerie Sharp and Glenn Gainor on previous projects, Cornwell was equipped with the experience and expertise to deliver creative strategies that aligned with their needs as well as with director Jon Cassar’s vision.

“Valerie called me several months before coming down here and said that they had this movie called When the Bough Breaks and told me that it was a thriller and that we were filming it in New Orleans,” explains production designer Chris Cornwell.

From the beginning, Cornwell knew that the one location he had to get just right was the Taylors’ home, as almost half of the film would be shot there. With the Taylors’ house being such a vital character in the film, Cornwell knew he had to find the perfect structure with hints of New Orleans culture, but also a modern elegance that represents a young professional couple on the rise. The 19th century Garden District home was modernized to adapt to the original young homeowners’ 21st century needs, which played out beautifully for Cornwell and his team.

For the Surrogacy Services of New Orleans building, Cornwell found the historic Falstaff Building, which was once the home of the leading brewery in the United States from 1870 until 2005. Leaving the façade intact, the Falstaff building’s interior was previously modernized, which was a style that aligned with Cornwell’s vision. This building became the setting for the Taylors’ introduction to their surrogate Anna Walsh.

At the heart of the French Quarter sits another fabulous New Orleans landmark, the New Orleans Aquarium, utilized by Cornwell as a meeting place for John and Anna.