From acclaimed Director Richard Linklater, and based on the New York Times best-selling novel by Maria Semple, Where’d You Go, Bernadette is a hopeful chase through the complicated world of the chic, genius, self-observer Bernadette Fox (Academy Award winner Cate Blanchett). An inspiring comedy about a loving Mom who becomes compelled to reconnect with her creative passion after years of sacrificing herself for her family. Bernadette’s leap of faith takes her on an epic adventure that jump starts her life and leads to her triumphant rediscovery. 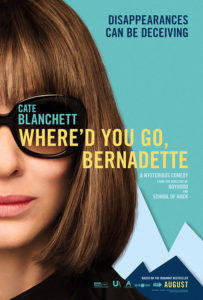 While Where’d You Go, Bernadette is very much about one woman’s struggle as an individual and the interior and exterior journeys she takes to find herself, it’s also the story of a family and the relationship between a fiercely close mother and daughter.

Maria Semple’s comedy adventure novel Where’d You Go, Bernadette debuted in 2012 and soon after climbed to the top of the New York Times best-seller list, where it stayed for over a year. Touching, heartwarming, hilarious and heart-racing, the world of the prickly and uniquely captivating creature that is Bernadette Fox was ripe for a big screen adaptation when Annapurna Pictures and Color Force acquired it in 2013.

A few years later, Richard Linklater and his team were brought on. The Oscar-nominated Director was immediately intrigued. “It’s a really complex portrait of a middle-aged woman who is kind of a genius but who isn’t practicing her art,” he says. “What that adds up to is kind of funny and a little scary. For anyone. It’s also a wonderfully complex portrait of a long-term relationship. Parenting, co-parenting, the ups and downs of that.”

Linklater also felt a personal connection to the character of Bernadette. “I think my mom is kind of a Bernadette,” he says, laughing. “She would leave the family for days at a time. Brilliant, but erratic a little bit. I felt I knew the character.”

Adding to the vibrancy of Bernadette’s world was Blanchett herself, who knew what she was signing up for when she took the title role. “The novel was absolutely thrilling, hilarious to read, but a bugger to adapt,” she says, laughing. “Structurally, it’s really difficult to translate to the screen. But I think at the heart it’s very much the same.”

Bringing any book to the big screen is a process, but Where’d You Go, Bernadette presented a unique set of challenges. An epistolary novel, the story unfolds over the course of a series of correspondences, through which Bee tracks down her mother’s whereabouts. Linklater knew he had a puzzle on his hands. “I think the obvious first question is: How the hell do you adapt a bunch of letters and emails as source material?” he asks. “This was certainly one of the more challenging adaptations imaginable. You have to make some pretty big choices. The idea was to not be too intimidated by that, and really just grab those characters and the fundamental story.” To take literal letters off a page and craft a cohesive visual interpretation, Linklater enlisted co-writers Holly Gent and Vince Palmo — he had directed their adaptation of Me and Orson Welles and worked with them on other screenplays.

Linklater is known for his spot-on casting and talent discovery. Ben Affleck and Matthew McConaughey were relative unknowns when Dazed and Confused hit theaters, and Boyhood star Ellar Coltrane was not only inspired casting, he spent eleven years being filmed. So, when Annapurna’s Megan Ellison gave Linklater a copy of Where’d You Go, Bernadette to read, he was in a different situation. “Cate had read the book before we received it from Annapurna,” says Sledge. “Early on she really wanted to play this character.” And obviously it worked out. Says Semple, “It was so fantastic to hear that Cate Blanchett was bringing Bernadette to life. The thing that got me most excited was all the intelligence that I knew she would bring to the role. And that you could tell there was just something wicked about her in the best possible way.”

Blanchett went to Seattle to meet Semple before filming started to hear about how the best-selling author came up with  Bernadette. “I wanted to give her a present,” says Semple, “and I thought: What do you give to Cate Blanchett who you know has everything? So, I took the prescription out of my dark glasses, put plain dark lenses in them, and gave them to her. I said, ‘Here’s a little talisman, this is where it all started, these are literally my dark glasses that I’ve had for ten years and I want you to have them.’” It was a touching gesture, but Semple couldn’t have anticipated the influence. The first time she showed up on set to see Blanchett in full Bernadette glory, the actress was wearing the glasses! “I pictured her keeping them at best, throwing them away at worst,” she says. “But she insisted that that’s what she wear for the movie.”

The look of the production was almost as important as the look of Bernadette: Seattle is one of the main characters in the novel, and for years, Sledge scouted locations there to film. When Seattle looked unlikely Sledge and the creative team looked to Vancouver as well. So it was a complete surprise to everyone that they found their Seattle in a suburb of Pittsburgh. “The search for Straight Gate spanned two and a half years, two countries, five cities…” says Production Designer Bruce Curtis, referring to the quirky wonder that is the former Straight Gate Home for Girls, where Bernadette, Bee, and Elgie live.