Rose-Lynn Harlan, 23, is bursting with raw talent, charisma and cheek. She is also fresh out of jail and has two young kids to support. All she wants to do is get the hell out of Glasgow and make it as a country singer. Rose-Lynn thinks her only chance of happiness lies in the Country capital of the world–Nashville, Tennessee. Marion, Rose-Lynn’s mother wants her to settle down, accept her life,andtake responsibility for herself, but when a chance encounter brings Rose-Lynn closer to her dreams of Nashville, she faceswhat she perceives as a choice between family and stardom. 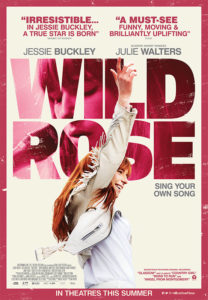 The film was without a director until Producer Faye Ward hadthe idea to send the script to the brilliant Tom Harper.

The desire to write a film about Country music had long been burning in writer Nicole Taylor. She explains “Country music is my passion. I have loved it since I was twelve and its probably the thing that I know most about in this world. The inspiration for WILD ROSE was my own obsession with country music. It’s all I’ve listened to growing up, it’s all I listen to now!”

Taylor reveals the other inspiration she had for writing Rose-Lynn’s story “I was watching a talent show on a Saturday night, and there was a woman who had an amazing voice but then she revealed she had five children and a history of addiction, and a couple of her kids are in care and it made me question what her dreams should be. And I was struck by not knowing what to want for her. She was so talented. Did that mean she should pursue her talent regardless of the mess in her life? Or, as a mum, should she be knocking this on the head and just be taking responsibility for her kids? That question fascinated me because I didn’t know the answer to it. It became the basis for Rose-Lynn and her relationship with her mother.”

WILD ROSE had been in development with producer Faye Ward for a while. “As with most films, WILD ROSE has definitely been on its own journey. It’s something that has been in Nicole’s soul for a long time, something she just hadto write; and the more you learn about Nicole,the more you realise that this film is a lot of her and her relationship experiences.”

Ward expounds upon the qualities of Taylor’s script that made her continue to champion it,“I love what it says about women, parenthood, dreams and identity.” She goes on to say,“What it is to be a parent in this modern world versus what it is to want something elsefor yourself too,and that the film doesn’t give you a clear answer tied up in a bow,and that there are different journeysand roads to travel to find the answers.”

The cast and crew had one thing in common when it came to their feelings on filming and living in Glasgow –they all adored their time there. Jessie Buckley says, “Glasgow is a city I would move to in a heartbeat, I absolutely fell in love with it.

Director Tom Harper agrees in that being in Glasgow helped them ‘find’ Rose-Lynn. “Filming in Glasgow,it has such a strong sense of identify,at the same time as being so welcoming. To be somewhere that has suchastrongsense of place…I hope it is a characterin the film as it isso significant to Rose-Lynn,and to Nicole writing it. We had the most lovely time being there.”