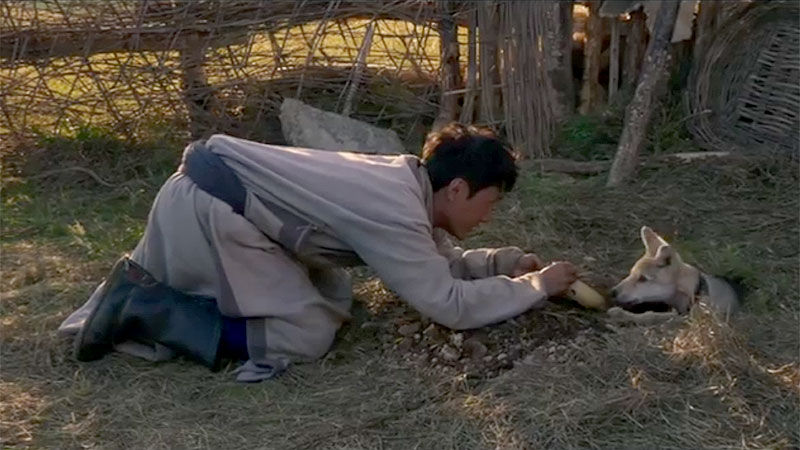 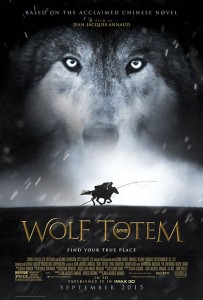 The Mongolian wolves were trained by Andrew Simpson.

Caught between the advance of civilization from the south and the nomads’ traditional enemies – the marauding wolves – to the north; humans and animals, residents and invaders alike, struggle to find their true place in the world.

[acc title=”How did this incredible adventure that started 7 years ago come about for you?“]It all started with a Chinese delegation that came to meet me in Paris. To give you the background, the book “Wolf Totem” was a dizzying literary phenomenon in China. Published in 2004, the novel had somehow escaped the vigilance of the local censorship. Hidden under a pseudonym, the author was unknown. His autobiographical narrative unfolded in the remote province of Inner Mongolia in 1967 to the beginning of the Cultural Revolution. Government agencies did not pay attention, but the story created a great stir. The journey of a young city dweller discovering the remote countryside and awakening to the nomadic life in a wild country had, decades later, a special resonance with the people in this country today, struggling with terrible environmental problems and pollution.[/acc]

[acc title=”So how did you become involved in this project?“]I read the French translation of the book. I found that the themes in “Wolf Totem” were familiar to me. The student Chen Zhen featured in the story made me recall myself as a young man, discovering Cameroon in Africa, which led me to make my first film, VICTORY SINGING (aka “Black and White in Color). The idea of ​​this “young educated” city dweller falling in love with this region of China, secretly raising a wolf amid the flocks of sheep made me recall my own early life journey. I was asked to adapt the novel for the big screen. I remind them that I was not popular with the Chinese authorities but they assured me that China had changed so I accepted the offer of a trip to Beijing. When I got there, I discovered that my films had been widely shown in the country, finding their place in the small quota for foreign productions. In a delightful paradox, my most popular film, THE LOVER was still banned…[/acc]

[acc title=”Was this trip official?“]When I got off the plane at Beijing, I was invited to the City Hall to meet with the mayor, a fan of the book and also very concerned about the decline in tourism in his city because of smog. I left that evening for Mongolia, accompanied by Jiang Rong, the author of the book. We stayed for three weeks at the scene of history – the foot of the mountain where the baby wolf was discovered on the banks of the frozen lake, where the horses drowned themselves, and where the old farmers live, who still remember that incident.

There has been a shift of opinion in those years. City residents suffer with pollution and wear masks to get around. They have to use their smartphones to find certain buildings and their children are deprived of outdoor activities out of fear that they will develop lung disease. Country people are regularly poisoned by contaminated water, or driven from their land by the encroachment of concrete buildings. All this is reported daily on radio and TV. I discovered a country and a people very different from what I imagined. I was well received there and my actors and my team had great local relationships. I worked with incredible freedom and enjoyed this privileged position. But what I liked immediately is that the people are very frank.[/acc]

[acc title=”Did the language barriers prove difficult especially with the actors?“]We all speak the same language, the language of cinema. Technician or actor, everyone knows what he has to do and when to do it. The only difficulty with Mandarin and Mongolian – was to the pronunciation of words and subtle accents. I surrounded myself with specialists of both languages ​​to make sure we did it correctly. [/acc]

[acc title=”Speaking of your actors, they are all professionals?“]We used local horse breeders and riders in the area. But everyone with a speaking role, even a few words, are professional actors. The three protagonists are stars in China. The others are from all over Inner Mongolia, the casting of which that had me traveling thousands of kilometers to meet them.[/acc]

[acc title=”How many people were with you on this shoot?“]There were 480 technicians, 200 horses, nearly 1,000 sheep, 25 wolves, and 50 trainers and handlers who look after them, including armed guards, and some local farmers. [/acc]

[acc title=”How did the wolves and horses interact with each other?“]Wolves love horse-meat, and the horses have no desire to be their meals! These scenes were very complicated to turn and very dangerous to film. Tracking at night huddled on unstable quad snowstorm … Andrew Simpson, trainer-in-chief, would never have let his animals take risks we took ourselves personally.[/acc]