Won’t Back Down is a powerful story – inspired by true events – of parenthood, friendship, hope and courage. Maggie Gyllenhaal and Viola Davis portray determined mothers­ who will stop at nothing to transform their children’s failing inner city school.  Facing a powerful and entrenched bureaucracy and a system mired in traditional thinking, they risk everything to make a difference in the education and future of their children. 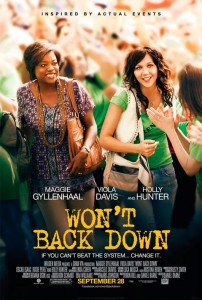 Director Daniel Barnz, presents these big ideas in a compelling portrait of the emotional lives of the two principals, who are the film’s heart and soul. They are mothers from opposite sides of the social and economic track, but who are equally determined to save the futures of their kids

The film echoes the overarching themes of such beloved pictures as “The Blind Side,”  “Erin Brockovich” and “Norma Rae,” all of which depict women who right a wrong by taking matters into their own hands and force necessary change for the collective good.  These characters embraced the chance to step into the arena and fight the good fight because no one else was going to do it.

Won’t Back Down is also a David vs. Goliath tale whose structure, says director Daniel Barnz, plays out in unexpected ways for a drama focusing on two characters. “In a way, we treat this as a kind of war film, so we endeavored to give Won’t Back Down as much scope as possible,” he explains.  The story depicts a series of battles in which the lead roles are combatants waging war against a broken system.  The weapons they employ are hope and action.

Audiences will identify with many of the struggles facing Jamie Fitzpatrick (Gyllenhaal) and Nona Alberts (Davis) as they fight for their children against a powerful bureaucracy.  Theirs is a story that emboldens and enlightens, and posits that one person can make a difference.  Says Barnz:  “I hope audiences take away a feeling for the power of the individual. We have the power to change things – for our children and for the next generations.  Oscar®-winning producer Mark Johnson (“Rain Man”) echoes: “Vital change can start with a single person and then another, and before you know it, there’s a block of people who are demanding, ‘We want something better for our children!’”

Viola Davis, an Academy Award® nominee for her work in “The Help,” takes this idea to the next level.  “It is our job, as human beings, to live a life bigger than ourselves, or otherwise we are not living.  We must risk more, love deeper, and leave something on this Earth bigger than ourselves.”