Lionsgate’s You’re Next takes one of the most terrifying film genres, the home-invasion movie, and turns it on its head—adding dimension, drama, and bone-chilling realism to one of life’s most universal fears. The story follows an upper-class family, the Davisons, who are as rich as they are estranged. In an earnest attempt to bring everyone back together, Aubrey and Paul Davison decide to celebrate their wedding anniversary by inviting their four children and their significant others to a family reunion at their remote and slightly rundown weekend estate. 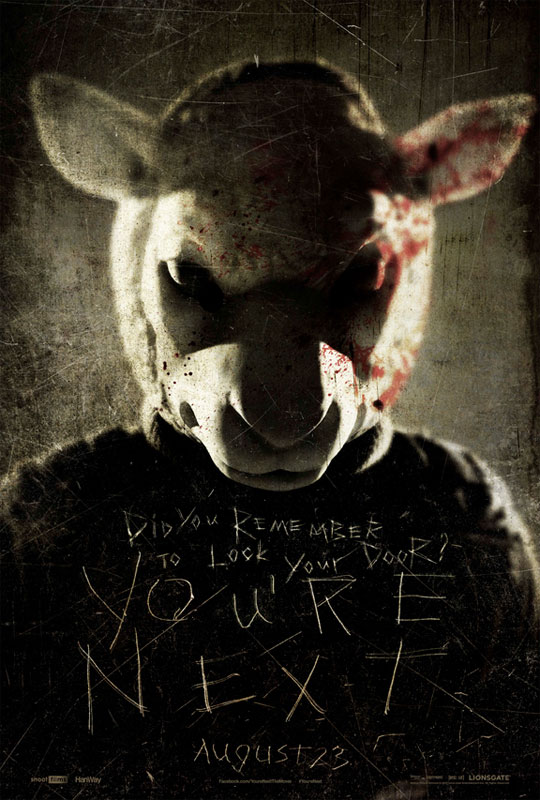 Director Adam Wingard found comfort for his self-described paranoia in what some might consider an unconventional place: classic home-invasion movies

It was during the editing process for director Adam Wingard’s 2010 serial-killer thriller A Horrible Way to Die that he started to conceive of his newest film, You’re Next. “I was doing the whole [edit] from my place in Alabama, which is kind of in the middle of nowhere,” Wingard says. “You become very aware of the isolation out there and start to get paranoid that somebody’s going to break into your house. You know you can’t depend on the cops, because it would take them so long to get to you. So you have to be more aware of the thought of depending on yourself and the terror of having to accept that responsibility.”

Principal photography for You’re Next took place over 26 days in and around snowy Columbia, Missouri. The majority of those days were spent shooting at the rambling and somewhat rundown English Tudor-style mansion that serves as both the Davison-family estate and the target of the movie’s home-invasion storyline. “Finding the house ended up being one of the most challenging parts of pre-production,” says director Adam Wingard.

Another technical element critical to the success of the film were the masks worn by the killers.“We wanted them to have iconic masks, but it’s hard to come up with a horror movie with a masked killer that hasn’t been done before,” says writer/producer Simon Barrett who grew up in Columbia.