Zero Dark Thirty (the title is military jargon for the dark of night, as well as the moment—12:30 a.m.—when the Navy SEALs first stepped foot on the compound) marks Kathryn Bigelow’s most ambitious production to date. Deploying the full arsenal of filmic art, from the naturalistic performances of an ensemble that includes Jessica Chastain, Jason Clarke, Joel Edgerton, Jennifer Ehle, Mark Strong, Kyle Chandler, and Edgar Ramirez, to innovative cinematography in extreme low-light conditions, to the painstakingly layered art direction, every facet of the production became a proving ground for Bigelow to make living history come alive on screen. 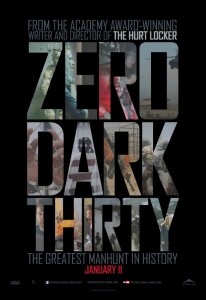 At the core of Zero Dark Thirty’s production lay a demanding casting process that would weave together more than 120 speaking roles from auditions of over 1000 actors from around the world.

The hunt for Osama bin Laden preoccupied the world and two American presidential administrations for more than a decade. But in the end, it took a small, dedicated team of CIA operatives to track him down. Every aspect of their mission was shrouded in secrecy. Though some of the details have since been made public, many of the most significant parts of the intelligence operation––including the central role played by that team––are brought to the screen for the first time in a nuanced and gripping new film by the Oscar®-winning creative duo of Kathryn Bigelow and Mark Boal.

For screenwriter and producer Mark Boal, a trained journalist and award-winning dramatist, sourcing and reporting the story so that it could be told accurately and fully presented countless unique challenges. He made a commitment to his sources that he would chronicle not only their personal struggles, but also the details and the ramifications of this historic operation, while simultaneously protecting the identities of those he interviewed. Through dialogue and scenes inspired by extensive interviews, Boal crafted characters that captured the essence of the real life people involved in the operation as well as other members of the military and intelligence communities.

At the end of the day, the filmmakers chose to tell the story through the eyes of a little-known participant in the intel hunt: Maya, a young CIA officer and targeter whose job is finding terrorists. In a multifaceted performance by Chastain, the character of Maya, which is based on a real person, became Boal’s vehicle for dramatizing the individual’s role in the larger scheme. In some ways, the portrait of her development, from innocence to horror and grim determination, echoes the evolution of a nation struggling to cope with the ruthless calculus of terrorism.

Unlike Bigelow and Boal’s previous collaboration, The Hurt Locker, in which fictional characters were set against the terrifying real world of Iraq, Zero Dark Thirty is distinctive and singular in its approach. It is an amalgam of action-film and investigative reporting and drama, neither a work of fiction nor a documentary but an exciting hybrid that tracks closely what is known of the intelligence hunt, while shedding new light on the secretive, dark corridors of the war on terror. It deftly depicts the mysteries of human courage and the ambiguities of a situation in which the usual moral rules no longer apply.