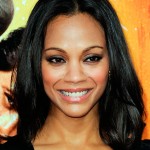 Zoe Saldana is the only actress to have three movies in the box office top twenty for three consecutive weeks (Avatar, The Losers, and Death at a Funeral).

Zoe Saldana (Zoë Saldana, Zoe Saldaña, born June 19, 1978), is an American actress. She gained prominence for her roles as Anamaria in Pirates of the Caribbean: The Curse of the Black Pearl and Neytiri in James Cameron‘s Avatar.

Zoe Saldana first languages are English and Spanish. She spent the majority of her early childhood growing up in Queens, New York. At 10, she moved with her family to the Dominican Republic, where they lived for the next seven years. Saldana enlisted in a ballet class at one of the most prestigious dancing schools in the Dominican Republic. After returning to Queens at age 17, she began performing with the Faces theater troupe, which put on plays geared to providing positive messages for teens, via themes dealing with issues such as substance abuse and sex.

Zoe Saldana was still a member of Faces when she gained exposure in an episode of Law & Order (titled “Merger”) which first aired in 1999. She left school after Center Stage, which film led to appearances in the Britney Spears vehicle Crossroads (2002) and the comedy-drama Drumline (2002).

On June 30, 2010, it was announced in Us Weekly that Zoe Saldana was engaged to her boyfriend of 10 years, actor and CEO of My Fashion Database Keith Britton. She is also a celebrity supporter of FINCA International, an internationally respected microfinance organization.