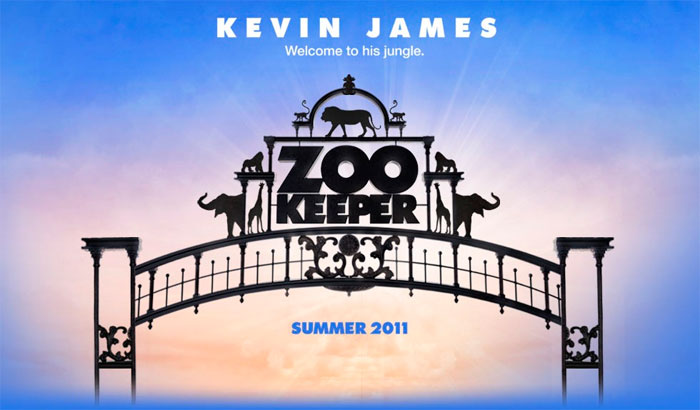 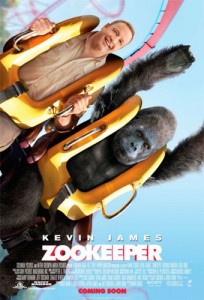 Tweet, the giraffe who rose to fame as a star in the classic Toys “R” Us commercials and who appeared alongside Jim Carrey in the film Ace Ventura: Pet Detective, died as a result of filming Zookeeper at the Franklin Park Zoo. The 18-year-old giraffe collapsed during feeding and in the care of his trainer.

The teaser trailer was released on November 5, 2010 attached to the 2D version Megamind and the theatrical trailer was attached with Rango. Two days earlier, Metro-Goldwyn-Mayer filed for Chapter 11 Bankruptcy, making the movie one of MGM’s last (not in the shelf list).

Story: The animals at the zoo adore their overweight caretaker Griffin Kayes (Kevin James), an amiable but lonely guy who’s never quite fit in. Finding himself more comfortable with a lion than a lady, Griffin decides he should leave the zoo and get a life.

When the zoo animals discover his plan, they decide to break their code of silence and reveal their biggest secret: they can talk. Now they won’t shut up and they’re teaching Griffin nature’s best mating rituals. To help him win the girl of his dreams (Leslie Bibb) and save their happy family, they’re willing to do — or say — anything.

There has been controversy generated as the film uses an elephant named Tai who was featured in a video (from 2005) released by Animal Defenders International (ADI) showing this elephant being abused by its trainers. A campaign to boycott the movie Zookeeper was formed since the outbreak of the news. ADI has also contacted the American Humane Association, urging them to re-evaluate how they assess the use of animals in films and the statements being made which effectively endorse the use of performing animals.