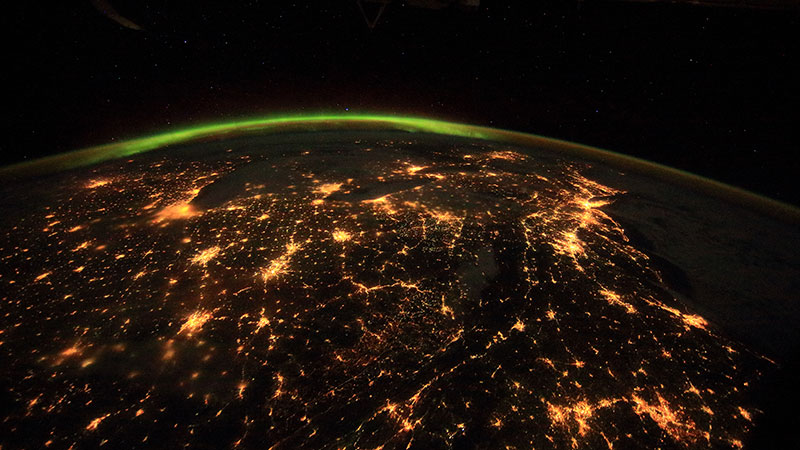 “A Beautiful Planet,” narrated by Jennifer Lawrence, gives moviegoers a never-before-seen glimpse of Earth from space and provides an increased understanding of our planet and galaxy. Made in cooperation with the National Aeronautics and Space Administration (NASA), the film features stunning footage of our magnificent blue planet — and the effects humanity has had on it over time — captured by the astronauts aboard the International Space Station (ISS), a research lab, training facility and observatory, built in orbit by 16 countries and powered by the sun. 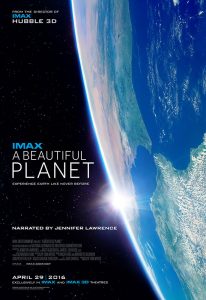 In “A Beautiful Planet,” director Toni Myers and her team capture the gradual depletion of the Colorado River Basin, which supplies water to 40 million Americans in seven states, according to the film.

For the first time on an IMAX space production, filmmakers, led by Toronto born director Toni Myers and director of photography James Neihouse, chose to use digital cameras to capture the stunning imagery of Earth from space as seen in “A Beautiful Planet.” The filmmakers spent roughly three years selecting just the right camera and equipment before deciding on the Canon EOS C500 EF digital camera, the Canon EOS 1D-C digital SLR cameras, and a selection of Canon Cinema Zoom and Prime lenses. In order to capture 4K images, the filmmakers also paired the EOS C500 with Codex recorders.

The cameras and lenses were transported into space aboard a SpaceX Dragon spacecraft, which launched from Cape Canaveral Air Force Station in Florida on Sept. 20, 2014. The choice to use digital cameras instead of the traditional film camera was made, in part, out of necessity as the space trucks used to transport the cameras and film negative have since been retired by NASA. However, it was a fortunate necessity since the digital cameras weigh considerably less than film and have a much longer record time. For instance, one film reel typically weighs 10 pounds and has roughly only three minutes of record time; whereas, a single data pack – which is comparable in size to an iPhone – carries with it roughly 30 minutes of record time.

“The cameras are smaller, easier to maintain and handle, and they don’t take up as much room,” says Neihouse, who, along with Myers, spent approximately 25 hours spread over the course of nine months to a year prior to launch training each astronaut on the equipment at the Johnson Space Flight Center in Houston. “/The astronauts/ didn’t have to go in to change and reload film, they only had to switch data packs every once in a while.” Myers says that the other key importance of the digital cameras was their ability to capture nighttime scenes.

Wilmore, who launched May 28, 2014, and landed March 11, 2015, adds that quickly changing light levels, combined with limited lighting options provided specific challenges to shooting at night. “As you go through the cycle, every 16 to 28 days you get a full moon or no moon, so it was important to experiment with different settings based on how dark it was at night.”

Commander Terry Virts — who launched Sept. 25, 2014, and landed June 11, 2015 — says that in addition to footage of Earth captured from the ISS, he tried to show what it was like for him and his comrades to live and work on the ISS. “I tried to capture a lot of the daily life,” says Virts, who is depicted in the film along with Wilmore performing a spacewalk, one of the most stressful jobs for the astronauts. (Wilmore performed four spacewalks during his time in space.)

With much of their schedule block filled with NASA duties, the astronauts who operated the cameras had to shoot the majority of footage and still photography during their personal time on nights and weekends. Virts says he took approximately 350,000 photos during his time aboard the ISS. In total, the astronauts captured a quarter of a million still photographs and between 10 and 12 terabytes of footage.

Prior to launch, Myers and Neihouse provided the astronauts with a shot list of 100 to 150 targets, though they were given “the freedom to shoot what they saw,” Neihouse says. The astronauts had regular communication via NASA with Myers and Neihouse, as well as retired astronaut Marsha Ivins, who served as Space Operations Consultant for IMAX on “A Beautiful Planet.” They would consult on specific shots or camera operations; prioritize the scene list; and help finalize other target needs, i.e. interior shots.

As one of the last astronauts to shoot for the film, Flight Engineer Dr. Kjell N. Lindgren, who launched March 27, 2015, and landed Dec. 11, 2015, was assigned with the difficult task of capturing some of the more challenging Earth sequences, such as footage of volcanic activity from space and the Northern Lights.

For Lindgren, in particular, life and work on the ISS brought with it an added project working on the “Veggie” lettuce experiment — the first time a U.S. crew has eaten a crop grown on orbit. Lindgren says that while the plants had already been planted prior to his arrival, he was responsible for watering and monitoring the plants as they grew. Other than the pleasure of being able to eat the actual crops, Lindgren — who received a BS in Biology from the U.S. Air Force Academy, an MS in Cardiovascular Physiology from Colorado State University and a Doctorate of Medicine from the University of Colorado — says growing the lettuce provided emotional benefits to the crew as well.

Like Lindgren, Commander Scott Kelly was given a special assignment while on board the ISS — to understand how the human body reacts and adapts to the harsh environment of space. For Kelly, one effect of weightlessness was the impact it had on his eye sight. (Virts, meanwhile, grew nearly two inches in zero gravity.) According to NASA, data from Kelly’s one-year mission, which recently ended on March 1, will be used to reduce risks to the health of crewmembers as NASA prepares to advance space travel beyond low Earth orbit.

In February 2010, the spacecraft Endeavour — piloted by Virts — transported the International Space Station’s final permanent modules, one of which, the Cupola, represents the largest set of windows ever flown in space. Comprised of seven windows, they are arranged in a hemisphere, providing a 180-degree field-of-view and giving the astronauts a direct view of station robotic operations.
“The Cupola was designed and flown up to the station specifically as a viewing platform for the crews on the station to actually observe space and Earth,” Myers says. “Knowing it was there, we were just thrilled to make use of the Cupola.” “A Beautiful Planet” is the first IMAX production to utilize the Cupola, and it offers “the best window of Earth that there is,” Neihouse says.

Deforestation is a major concern highlighted in the film and its effects seen from space. Once covered in forests, the island of Madagascar is now brown; Brazil, too, has suffered significant losses as its immense rainforest — home to nearly half the species found on Earth — has been cut down and burned. Nearly half a million square miles have been lost over the past four decades.

“Seoul, South Korea is one of the brightest, most vibrant cities on the planet,” Virts says in the film. “The whole South Korean country is lit up, and then there is this line of the border and this complete darkness of North Korea …”

Beyond Earth, “A Beautiful Planet” offers a fascinating look at what life could be like if conditions were right on distant planets light years away. The film refers to what scientists call the “Goldilocks Zone” — a system not too hot, nor too cold for liquid water to exist. Myers singles out one system called Kepler-186, which contains five Earth-sized planets, one of which — Kepler-186f — is situated at the right distance away from its star to sustain water … and life? That is perhaps the thought among scientists, though for Myers, the potential existence of another Earth is foremost a reminder to respect and preserve our home planet and the need to continue to explore and inspire, especially among our youth.