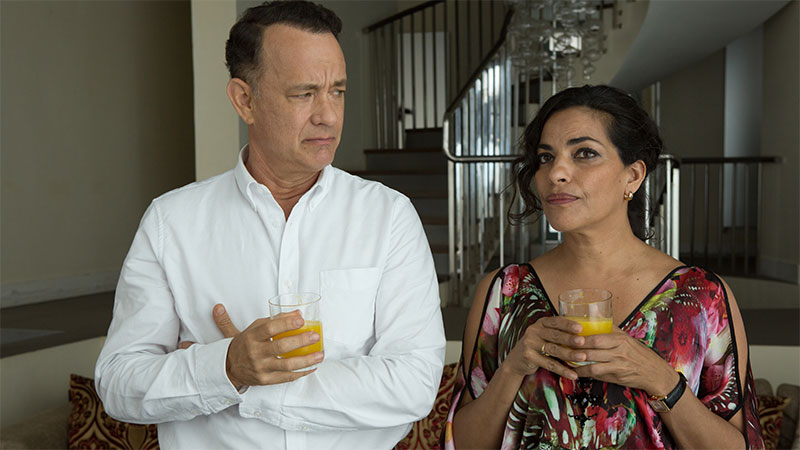 In recession-ravaged 2010, American businessman Alan Clay (Tom Hanks), broke, depressed and freshly divorced, arrives in Jeddah, Saudi Arabia to close what he hopes will be the deal of a lifetime. His mission: sell a state-ofthe-art holographic teleconferencing system to the Saudi government. 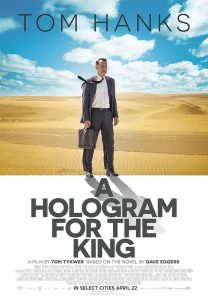 In fact, the Morocco production involved as much “intensity” as any filmmaker could ask for. Equipment trucks broke down. The March-April rainy
season caused flooding on coastal areas that were supposed to appear arid. Insects swarmed. “We had one disaster or another every other day, from sandstorms and winds to the time billions of ladybugs came down on our set in Casablanca,” recalls producer Arcadiy Golubovich.

After Tom Hanks gave Dave Eggers’ National Book Award-nominated novel A Hologram for the King a rave review on his Twitter feed in 2012, only one issue remained unresolved for the two-time Oscar®-winning actor. “I was already a big fan of Dave Eggers’ work, having read a bunch of his stuff including things he did with McSweeney’s literary review,” Hanks says. “Then I read A Hologram for the King in one sitting and my only question when I finished it was whether or not he wanted a movie made out of his book.”

German filmmaker Tom Tykwer, who co-directed Hanks in the 2012 sci-fi epic Cloud Atlas, felt just as strongly about the source material. Tykwer, who had worked with Eggers previously on a miniseries
adaptation of the San Francisco-based author’s novel What Is the What: The Autobiography of Valentino Achak Deng, arranged a meeting with Hanks and Eggers at a Los Angeles hotel. After pitching his ideas for the book’s cinematic adaptation, Tykwer and Eggers came to a very un-Hollywood-like agreement. “Dave and I trust each other,” the director explains. “I love that he offered to get rid of all the contract stuff and just write on some piece of paper ‘I promise not to be an asshole’ and then we would both sign it. We’re very much on the same page when it comes to artistic exchange. Dave understands that once you let somebody take over your vision, you have to keep some distance.”

Tykwer was equally excited about partnering once again with Hanks. “Working with Tom is liberating for a filmmaker because he’s so open-minded to every moment and every situation,” Tykwer says.

In his adaptation, Tykwer mined Alan’s predicament for laughs. “I decided to put most of my effort into making it work as a comedy,” he says. “Even though it’s a dark story about someone who’s in a really bad place, at the same time there’s something absurd about Alan’s situation. If you have Tom Hanks playing with all the potentials of that situation, the movie will be funny in a meaningful, complicated, but very fascinating way. That’s what I aimed for when I started the adaptation.”

In addition to emphasizing the book’s humor, Tykwer bolstered the romantic elements as he translated Eggers’ story from page to screen. “The longer I worked on the script, the more profound the love story became because it connects to this whole third-act decision where the movie becomes a more optimistic tale,” Tykwer says.

Alan is coaxed out of his funk by Zahra Hakem, an alluring, talented surgeon portrayed by London-born Sarita Choudhury. The half-Indian, half-English actress says she had her work cut out for her portraying a character that is so completely different from her. “Zahra is so not like me,” Choudhury laughs. To inform her performance, Choudhury followed doctor friends on their rounds, learned to speak Arabic and mastered a Jeddah-specific accent for her English-language dialogue. Once filming began, Choudhury assumed the traditional clothing of a Saudi woman. “The first time I put on the hijab, it felt weird, like I was wearing a scuba-diving suit kind of thing,” she says. “It was strange wearing the scarf and the hijab until I got used to it. I didn’t think I would feel attractive in those clothes but I actually felt almost pretty, which I didn’t expect.”

Before he meets Sarita, Alan forges his first solid human connection in Saudi Arabia with Yousef, a taxi driver played by Egyptian-born actor Alexander Black. “Yousef is walking on a border between two cultures,” explains Black, who worked primarily as a stand-up comedian before being cast in A Hologram for the King. Black’s Egyptian heritage proved to be a plus for director Tykwer.
“Besides having an incredible sense of humor, Alexander brought this interesting balance between Western influences and Middle-Eastern roots from his own life,” he says.

Denied permission to shoot A Holograph for the King in Saudi Arabia, Tykwer and his team began scouting locations in the neighboring United Arab Emirates, where landscape and architecture would have provided a near-perfect match. But UAE officials ultimately decided to prohibit production there.
Jordan and Egypt also proved unworkable, so the filmmakers wound up in Morocco, about 3,000 miles west of Saudi Arabia, where they began principal photography in March 2014.

Working from a few iPhoto images that Tykwer snapped while in Saudi Arabia, filmmakers fashioned their own version of KAEC in southern Morocco. Hanks had worked briefly in Morocco during the shoot of Charlie Wilson’s War, but this time around the actor spent nearly eight weeks in some of
the nation’s most remote regions. “My idea of desert is Palm Springs or Death Valley, where if you just keep going a little bit further there’s going to be a city with hot water and every convenience. But we were shooting in the Western Sahara, a place where if you were on foot, you wouldn’t make it out alive.”

Choudhury, who grew up in Jamaica, Mexico and Italy, found that some of the Moroccan locations reinforced her character’s sense of cultural constraint.