“War Dogs” follows two friends in their early 20s (Hill and Teller) living in Miami Beach during the Iraq War who exploit a little-known government initiative that allows smaller businesses to bid on U.S. Military contracts. Starting small, they begin raking in big money and are living the high life. But the pair gets in over their heads when they land a 300 million dollar deal to arm the Afghan military—a deal that puts them in business with some very shady people, not the least of which turns out to be the U.S. Government. 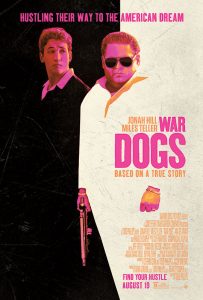 Filming on “War Dogs” began in Romania, which doubled for the country of Albania, where a seemingly endless supply of arms and ammunition is being stored. From Romania, the filmmakers and cast traveled to Las Vegas, where Phillips returned to a familiar location: Caesar’s Palace. Scenes were filmed in the famed casino and in their popular restaurant, Rao’s.

It all started during the George W. Bush administration when huge no-bid contracts to supply the wars in Iraq and Afghanistan were being awarded to conglomerates like Halliburton, Raytheon and Lockheed Martin.

The tale was chronicled in a 2011 Rolling Stone article called “Arms and the Dudes,” by Guy Lawson. “The Bush administration was trying to favor small businesses,” Lawson expands, “and no business was smaller than these dudes, sitting in a studio apartment in Miami Beach with nothing but a bong on the table, a laptop and a cell phone.”

Producer Mark Gordon recounts, “I was on a plane when I first read the story in Rolling Stone, and I couldn’t believe it was true. Everything about it cried out to be made into a movie.” Gordon adds that Todd Phillips was the perfect director to bring the tale to the big screen. He states, “There is no one better than Todd to tell a story about outrageous characters getting into all kinds of trouble. He’s the master.”

Bradley Cooper relates, “I was very interested to see how Todd was going to take the article and realize it cinematically.”

“War Dogs” also marks the first film on which Phillips and Cooper teamed as producers under the banner of their new production entity, Joint Effort.

“As I was going through it,” Phillips recalls, “I thought, ‘This has the makings of a terrific film.’ And the more we dug into it, the more evident it became that it could be a great two-hander with the right two actors.”

Jonah Hill and Miles Teller star, respectively, in the central roles of Efraim Diveroli and David Packouz, and both say they were intrigued by these characters who jumped at the opportunity to reap huge rewards without giving much thought to what they were sowing.

The real David Packouz admits, “I won’t lie, it was pretty awesome for a while. We would go to parties and people would introduce themselves: ‘I’m a stockbroker or I’m in real estate… So what do you do?’ ‘We’re international arms dealers.’ The initial reaction went from ‘You’re kidding, right?’ to ‘You’re full of s**t,’ but once they realized we were not joking, they were blown away. One reason the story is so crazy is that very few people make it big in the arms business, especially at our age. The fact that we won a contract to supply the entire Afghan army was totally bizarre.”

“There was a lot that happened that wasn’t in the movie or was changed,” Packouz attests, “but life is always more complicated than depicted in Hollywood movies.”

As incredible as the actual circumstances were, Phillips emphasizes, “This isn’t a documentary. He and co-writers Jason Smilovic and Stephen Chin took both dramatic—and comedic—license.” In working on the screenplay, Chin spent some time with Packouz in Miami. He notes, “America may be the land of opportunity, but David had figured out early on that hard work alone was not going to make him rich. I believe that’s why ‘Scarface,’ which was also set in Miami, was such an important movie to them growing up.”

“War Dogs” unfolds on a global scale, so it was important to Todd Phillips to make the film on an international stage. He affirms, “When you’re on location, I really believe it informs everyone involved. It informs the cinematographer, the production and costume designers, the actors… To me, the environment is a huge tool, and this is one movie where we really took that to another level.”

Production designer Bill Brzeski who counts this as his fifth collaboration with Phillips, adds, “Todd likes things to be in the actual places, or as close a match to the actual places as possible, so we tried to go with practical locations and did not shoot much on soundstages. It was also the preference of our DP, Larry Sher, who appreciates natural lighting, which adds to the reality.”