A precision-trained military dog, Max serves on the frontlines in Afghanistan alongside his handler, U.S. Marine Kyle Wincott. But when things go terribly wrong on maneuvers, Kyle is mortally wounded and Max, traumatized by the loss of his best friend, is unable to remain in service. 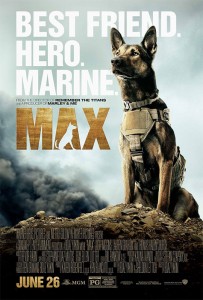 To facilitate the extreme biking scenes in the film, the production used land at Latta Plantation in Huntersville, and in Lincolnton, as well as a forest ridge and path at Crowder’s Mountain in Kings Mountain.

Boaz Yakin, the co-writer/director/executive producer of Max a self-proclaimed dog-lover attests, “I wanted to tell a story that was emotional and heightened, while still keeping it rooted in reality.” He turned to longtime friend Sheldon Lettich, who co-wrote the screenplay. “Sheldon is a Marine Corps Vietnam Veteran and brought in the idea of using MWD’s. These dogs risk their lives, or have their lives put at risk, going far ahead of their units in order to literally smell out danger,” he adds.

The decision to make Max a Belgian Malinois, instead of a more familiar breed such as a German Shepherd, was informed by the fact that the Malinois has become the breed of choice to serve as MWDs for military forces and law enforcement agencies across the United States and throughout the world. They can be deadly and are trusted to guard the White House and the President of the United States.

Before writing, Yakin and Lettich observed the dogs in action at the Camp Pendleton Marine Corps Base K9 Unit in California. They found that some MWDs have also been adopted by the civilian families of dog handlers who had been killed in either Iraq or Afghanistan.

Producers Karen Rosenfelt and Ken Blancato were intrigued by the idea of a retired military search dog and the family who takes him in.

Retired Marine Corps Major Rich Bourgeois, who was hired as a military advisor by the filmmakers, observes, “I served a tour in Iraq and I’ve seen some dogs work. There’s a bond that the handlers have with their dogs that’s second to none because they’re with each other 24/7.”

It was important Max’s markings allow for his expressive face to be seen because so much would need to be emoted through his eyes. While the classic Malinois has more of a mask, Yakin wanted one that had less black around the face.

Forbes searched nationwide for a young canine that could be trained and had that specific look. He found a 2 year old dog in Kentucky, named Carlos, who was lovable, curious, and so focused he had been named after Carlos Hatchcock, the Vietnam War sniper who had 93 confirmed kills and was known for his incredible concentration.

Forbes flew to Liberty Dog Camp in Kentucky to put the dog through some paces and decided Carlos was trainable. He sent photos of Carlos back to Yakin, and Yakin flew to meet the dog. “I loved him,” says the director. “He was our Max. He got all the close-ups and is the face everybody will recognize.”

Next, Forbes had to find stunt doubles for Max. “Each of the dogs is proficient at different things and were used for that specific behavior. But because the film is so dog intense, they were also cross-trained and switched out to ensure their health and safety,” explains Forbes.

The filmmakers cast Josh Wiggins as Justin. Wiggins immediately related to the story. He not only hails from Texas, where the film is set, but has a brother who served in the army, three dogs at home, and a father who trains bomb-sniffing dogs for the Houston Police Department.

Thomas Haden Church stars as Ray, who is grieving the loss of the son who followed in his footsteps as a Marine, and having a hard time dealing with the son at home who overtly tries not to be anything like him. Like Wiggins, Church, also a Texan, related to his character.

Lauren Graham, who stars as Pamela, was intrigued by her character, a woman who has suffered the ultimate loss—the loss of a child, with no one to comfort her. Graham describes Max as “the last piece of Pamela’s son.”

“Max” takes place in Lufkin, Texas, on the outskirts of San Antonio, near Lackland Air Force Base where MWDs are initially trained. However, filming actually took place in North Carolina, with production based in and around Charlotte. The small town of Lincolnton doubled for Lufkin, where several scenes play out, including the Fourth of July parade on Main Street.