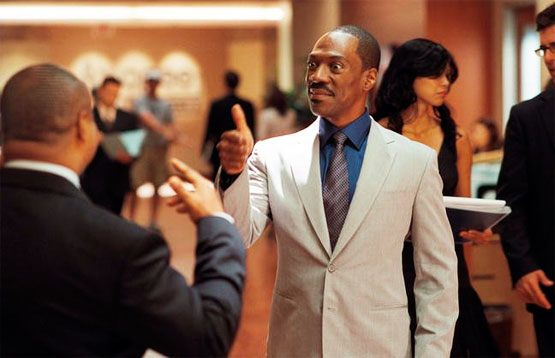 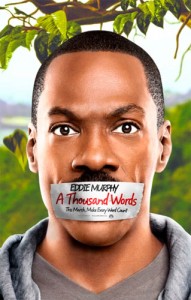 Eddie Murphy plays Jack McCall, a fast-talking literary agent who can close any deal, any time, any way.

Thousand Words was originally filmed in 2008, to be released in 2009, but was repeatedly delayed after being caught up in the separation of DreamWorks Pictures from Paramount Pictures and Viacom. During an interview for Fred: The Movie, director Brian Robbins stated that the film would be released in 2011. Reshoots were done on the film early in 2011.

Eddie Murphy is Jack McCall, a fast-talking literary agent, who can close any deal, any time, any way. He has set his sights on New Age guru Dr. Sinja (Cliff Curtis) for his own selfish purposes. But Dr. Sinja is on to him, and Jack’s life comes unglued after a magical Bodhi tree mysteriously appears in his backyard. With every word Jack speaks, a leaf falls from the tree and he realizes that when the last leaf falls, both he and the tree are toast. Words have never failed Jack McCall, but now he’s got to stop talking and conjure up some outrageous ways to communicate or he’s a goner.

The film was then given a January 2012 release, but after Murphy was announced as Oscar host (he has since stepped down), the film was given an official release of March 23, 2012.