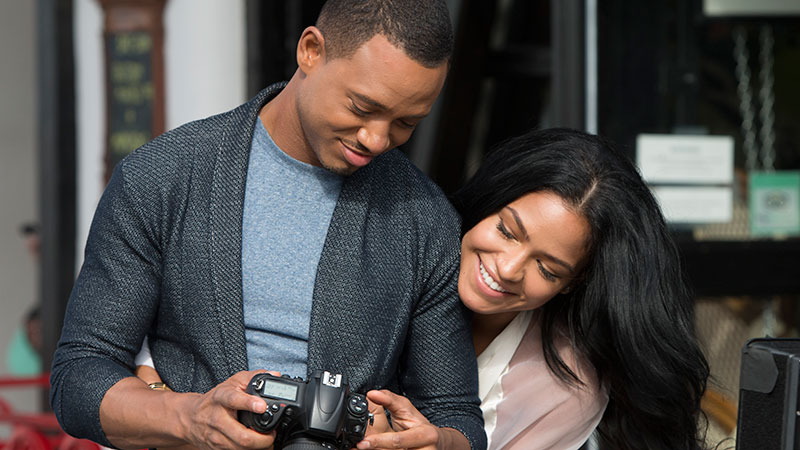 Successful Los Angeles talent agent Charlie (Terrence Jenkins) is living the bachelor dream: he owns a stylish house in the Hollywood Hills, enjoys a massive Instagram following for his art photographs and beds one beautiful woman after another. Perfectly happy with his glamorous if shallow existence, Charlie finds himself on the defensive as his best friends Victor (Robert Christopher Riley), Ginger (Lauren London), Rick (Donald Faison) and Pressie (Dascha Polanco), mock his player lifestyle, and his psychotherapist sister Sherry (Paula Patton) tries to uncover the reasons behind his fear of commitment. 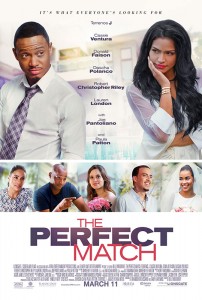 As soon as Queen Latifah heard the concept for The Perfect Match’s unique plot from her producing partner, Flavor Unit Entertainment Co-CEO Shakim Compere, she was sold on the project. “I loved the role reversal of the two leads,” says the Oscar®-nominated, Emmy®-winning singer, actress and producer. “I knew we had to produce this film.” They then teamed up with Johnson Chan and Doug Shaffer of Jorva Entertainment Productions to finance and co-produce the film.

Remembering the deft touch director Bille Woodruff brought to her 2005 hit comedy Beauty Shop, Latifah reached out to the Los Angeles-based filmmaker for Flavor Unit’s newest project. “I know he has a great sense of humor and actors respect him.” Woodruff was immediately impressed by the script’s intelligence and humor. “I especially liked that the female character Eva was different than a lot of female characters you see portrayed in romantic comedies. I also knew I’d have a really good time finding great actors who could bring this story come to life.”

The Perfect Match rises and falls on the handsome shoulders of Charlie, played by Terrence Jenkins. The personable actor, a former BET host and “E! News” anchor, embraced the opportunity to showcase a wide range of emotions in his first leading-man role. Jenkins, who also serves as a producer on the film, sees Charlie as a variation on the smooth-talking movie characters he grew up idolizing. “My favorite movie of all time is Boomerang, which has Eddie Murphy as an advertising executive,” Jenkins says.

Filmmakers needed a mesmerizing talent to play the woman who rocks Charlie’s world. “We did an extensive casting process to find the right woman to play Eva because she had to really make Charlie go crazy,” explains actor and producer Jenkins. “Like Zooey Deschanel from 500 Days of Summer.”

After going through traditional casting lists, Woodruff, Jenkins and the producers at Latifah’s Flavor Unit Entertainment expanded their talent search. “We looked at musicians and fashionistas and models,” Jenkins says. “At some point Yaneley Arty from Flavor Unit suggested Cassie Ventura.” The producers quickly learned that Ventura, a Filipino-African-American-West Indian-Mexican beauty from Connecticut, had been taking acting lessons and was eager to audition. Although the singer and model only had a handful of acting credits on her résumé, her natural charisma won over the filmmakers. “The minute Cassie came into the room, everybody was like, ‘Alright, she’s it,’” Jenkins says. “Cassie is undeniable on camera.”

Until Eva comes along, the most important woman in Charlie’s life is his psychotherapist sister Sherry, played by Paula Patton. Patton, who first met Jenkins when he appeared in her 2013 rom-com Baggage Claim, reveled in her interplay with the actor. “Terrence is a really hard worker but more than that, he’s got this natural, honest quality and that’s what makes him such a great leading man: Anybody could invite Terrence to dinner and know that he’d be good company.” Jenkins confides that he developed a crush on Patton when she appeared opposite Denzel Washington in the 2006 movie Déjà Vu.

Since Charlie’s work life revolves around show business, the filmmakers decided to bring in some actual music stars to play his clients. “We felt like we should get a real rapper to play the guy that Charlie’s trying to sign,” Woodruff says. “When we got Cassie Ventura in the film, she was like, ‘Well what about French Montana? He’s a character, man, you’ve got to meet him.’” The Moroccan-born rapper had no reservations about playing the comedic role to the hilt and sharing the limelight with a trained monkey who serves as his character’s confidante and advisor.

In The Perfect Match, Charlie’s known around the office as the “Diva Whisperer” because of his ability to soothe the nerves of the hilariously high-strung singer Avatia. To cast the cameo, Woodruff called on multi-platinum R&B singer Brandy Norwood. “Because of a scheduling issue, we needed someone to come in at the last minute and do the scene,” Woodruff recalls. “Terrence and I called Brandy at four in the morning and we were like, ‘Would you please do this for us?’ We pitched her the whole movie, and then we told her: ‘The thing is, we need you to be on set in three hours.’” Norwood kindly agreed and Woodruff set to work tailoring the scene for her. “I rewrote it that morning because it became a whole different thing with her in it,” he says. “Then the amazing Kali Hawk showed up to play Brandy’s assistant and it all came together.”

While The Perfect Match deals in universal relationship issues, the particulars of the story are very much rooted in the hills, beaches and boulevards of contemporary Los Angeles. Postcard-pretty locations include Manhattan Beach, where Charlie goes to meet women, take photographs and relax.