On January 15, 2009, the world witnessed the “Miracle on the Hudson” when Captain “Sully” Sullenberger glided his disabled plane onto the frigid waters of the Hudson River, saving the lives of all 155 aboard. However, even as Sully was being heralded by the public and the media for his unprecedented feat of aviation skill, an investigation was unfolding that threatened to destroy his reputation and his career. 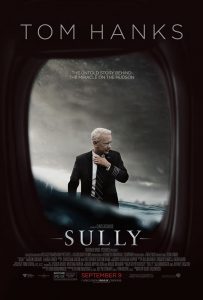 With Christian Jacob and The Tierney Sutton Band composing the film’s score, Eastwood wrote, along with Tierney Sutton and J.B. Eckl, the song “Flying Home (Theme from ‘Sully’),” performed by The Tierney Sutton Band. The song is an apt accompaniment to an emotional postscript when the real Sully, Lorrie Sullenberger and more than 50 of the survivors gather for a reunion at the Carolinas Aviation Museum in Charlotte, North Carolina, where the Airbus is on display as a symbol of the heroic efforts of everyone that day.

Clint Eastwood directed the film from a screenplay by Todd Komarnicki, based on the book Highest Duty by Chesley “Sully” Sullenberger and Jeffrey Zaslow. The film reunited Eastwood with several of his longtime collaborators, who most recently worked with the director on the worldwide hit “American Sniper”: director of photography Tom Stern and production designer James J. Murakami.

Producer Allyn Stewart says of initial conversations with Sullenberger, “The second Sully started to give us the details of what happened to him after the event, I realized this was the real architecture of the movie. We found a great screenwriter, Todd Komarnicki, to adapt the book. He’s really good at getting under the skin of a normal guy, and that’s the essence of Sully; he’d be the first one to say he’s simply a man who did his job very well.”

Not only did the filmmakers choose to embrace the actual surroundings in which the event happened by shooting as much as possible in New York City, they also sought to involve a good number of its citizens who were there that day in the film. This not only meant reaching out to them for research purposes, by talking about what they remember, but also recruiting many who were part of the rescue to reenact their efforts for the cameras. Both air and water rescuers and several Red Cross staff and volunteers returned to the “scene” to recreate their own heroics of the day, reinforcing what Sullenberger himself has observed on many occasions: that the positive outcome was not due just to the swift and steady actions of one, but also the fortitude of many.

The role of Sully was one the always-in-demand Hanks couldn’t turn down, despite having to postpone a well-earned break. “Sometimes you read something that is so stirring and at the same time so simple, such a perfect blend of behavior and procedure,” he reflects. “Now, I’m as competitive as the next actor, so I knew I wanted at least a shot at it, even though I’d been working pretty steadily for about six years. Sure I was beat but, not unlike a solid jolt of adrenaline, this role, Sully, Mr. Clint Eastwood…they all came along. I felt like I couldn’t pass up a chance at playing in this great double-header at the end of this long baseball season.”

Although the two had never worked together before, Eastwood says, “Tom was one of the first people we thought about for the part. But at the time he was just finishing a picture and we didn’t think we could get him. But he read the script and liked it and made himself available. And he was terrific, a consummate pro, and it was kind of effortless working with him.”

The filmmakers also appreciated what Hanks brought to the shoot when the cameras weren’t rolling. Offers Eastwood, “He has a great sense of humor, so that makes it fun. He’d be standing around waiting, sometimes in the rain, and still making the crew laugh.”

In fact, prior to production Sullenberger’s wife, Lorrie, was most excited to see the two men together. “When I saw Tom for the first time, it was so strange. Then later I would find myself looking at my husband, thinking, ‘His hair looks just like Tom’s…wait…Tom’s looks just like Sully’s!’” she laughs.

Joining Hanks on the flight deck, Aaron Eckhart took on the role of co-pilot Jeff Skiles. Eckhart says he was very affected by the screenplay for “Sully.” Prior to filming, Eckhart contacted Skiles as well. Recalling their conversation, Skiles says, “We spoke for a couple of hours and he asked me a lot of questions about being a pilot, not just why I wanted to be one but also why I continue to do so after that day.”

“Tom’s an extraordinary actor,” Eckhart adds. “He’s so in command, it’s effortless. I’d like to think working with him had an effect on me; I’d like to learn some of his tricks.”
Both men spent time in flight simulators prior to filming in order to look the part when the cameras rolled. “We practiced with both Captain Sullenberger and Mr. Eastwood there,” Eckhart notes, offering that the actors eventually got the hang of it well enough for their scenes. “Pilots look so relaxed; it’s like home in there for them, so we felt a responsibility to do it right. We got a good feel for it.” “We invited Sully’s participation whenever he was available,” Eastwood states. “He kindly arranged for the simulators and pilots to show Tom and Aaron exactly how it would work. They got the cram course, but they went to town.”

Laura Linney, who had been in New York City on the day of the 2009 landing, was cast in the pivotal role of Lorrie Sullenberger before she’d even read the script. Linney worked with Eastwood previously, when he directed her as his character’s daughter in “Absolute Power,” and was happy to do so again.

In the film, much of Sully’s time right after the landing is taken up by the NTSB. In reality, the NTSB hearings didn’t actually take place until 18 months later; the filmmakers took dramatic license, condensing the events in order to present the full story within the timeframe of the movie. The film’s NTSB team is comprised of Mike O’Malley as lead investigator Charles Porter; Jamey Sheridan as Ben Edwards; and Anna Gunn as Elizabeth Davis. On Sully and Skiles’ side of the table, Holt McCallany plays union rep Mike Cleary, and Chris Bauer is US Airways’ Larry Rooney.

The exteriors for “Sully” were shot primarily on location in New York City—where better to recreate the events of the day than right along the Hudson and its surrounding piers, which had served the real participants so well at the time?

Using IMAX’s customized ARRI ALEXA 65 cameras whenever possible and RED cameras for 2nd unit and aerial work, filming began in the early fall of 2015 at a hangar in Kearny, New Jersey, where the film’s NYPD dive unit officers jumped into a waiting helicopter after receiving the emergency call.

On subsequent days, crowd reaction shots to the imagined plane landing were captured on the Upper West Side’s George Washington Bridge, at the Time Warner Center and in Columbus Circle. Pier 81, near the Intrepid, was home base for the ferry work, and the production utilized NY Waterway ferries, just like those that responded on the real day.

The flight deck of the A320 was created on Warner Bros.’ Stage 19 and the set was supported on a gimbal, but because there aren’t many water tanks available in Hollywood that can hold a 140-foot airplane, the filmmakers were happy to go to neighboring Falls Lake at Universal. Not only was there room for the Airbus, but they were also able to build a couple of facades for the ferryboats to match the wide shots collected in New York, to which visual effects supervisor Michael Owens would later add the plane.