When teenage Yi (CHLOE BENNET, Marvel’s Agents of S.H.I.E.L.D. TV series) stumbles upon a young Yeti on the roof of her apartment building, she and her friends, Jin (TENZING NORGAY TRAINOR, TV’s Liv and Maddie), and his cousin, Peng (ALBERT TSAI, TV’s Fresh Off the Boat), name him “Everest” and embark on an unforgettable quest to reunite the magical creature with his family at the highest point on Earth. 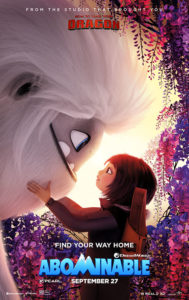 In Abominable, the city skyline is filled with details typical of a modern Chinese metropolis. Signs dotting the skyline advertise tea shops, popular international supermarkets (with imported goods), Huazhu Hotel (one of China’s largest hotel brands), authentic specialty food restaurants, and even McDonald’s. (Fun fact: China reportedly has the third most McDonald’s restaurants in the world—after only the U.S. and Japan.)

For Abominable writer/director Jill Culton, the road to DreamWorks Animation has been a long and winding one. After she graduated from CalArts, she cut her teeth as an animator and storyboard artist at Pixar, where she collaborated on Toy Story, Toy Story 2 and A Bug’s Life before helping to craft the story for Monster’s, Inc. As well, she spent several years at Sony Animation, where she directed their first animated-feature film, Open Season. Culton had met with DreamWorks over the years to discuss various projects, but it was not until she was swept away at an early screening of How to Train Your Dragon that everything clicked into place and she decided to join the studio.

Oriental DreamWorks, the company that later became Pearl Studio, and DreamWorks Animation pitched Culton the idea for a “Yeti movie,” and she took the seed of that idea back to her home in a small town nestled in the woods of Marin County in Northern California. There, surrounded by majestic redwoods, she began to imagine an epic tale of a young woman who finds herself at an unimaginable crossroads.

The massive contrast in size between the Yeti, Everest, and Yi was inspired by a very specific memory from Culton’s childhood. “When I was five or six, my neighbors had this giant London Great Dane that had to be almost 200 pounds,” she says. “I was always scared but intrigued; he outweighed me by more than double. One day, my friend Nancy and I were running around the house, and he started chasing us. I jumped off the stairs to avoid him, and I fell. This giant dog pinned me to the ground and was breathing in my face, staring into me; I was terrified but amazed at the same time. Since then, I’ve only had big dogs. They’re just this huge, fascinating presence in my world.”

In bringing Abominable to life, Culton would find kindred spirits in producer Suzanne Buirgy, DreamWorks Animation’s longtime champion of the production, and Peilin Chou, chief creative officer of Pearl Studio and our story’s Yi writ large. Making history as the first trio of female filmmakers to bring a big-studio animated feature to the big screen, the collaborators did and do not take that historic designation lightly.

When it comes to character creation and design, Culton takes her craft with the utmost seriousness. This work ethic and passion goes back to her first feature, Toy Story, when she was in her early 20s. “A bunch of us from CalArts moved up to Northern California,” Culton says. “This was the first computer-animated film, and Pixar wanted 12 animators to start on the same day; I was one of those. We had to learn UNIX, and every day, we’d come in and software would be either broken or enhanced. It was so hard every day, and none of us knew at the time that CG was the way that the world was going.”

The filmmaker’s passion for inventive storytelling extended to the creation of one of that studio’s most beloved characters, Jessie, from Toy Story 2. All her hard work proved worth it, not just on a creative level, but a humanitarian one. “I’ll never forget that after the film came out, letters started coming to the studio and they were posted on the wall,” she continues. “They were, ‘My kid fought cancer because he thought he was Buzz Lightyear and could go to infinity and beyond.’ I realized the power of movies then. We give our lives to these things, and I knew I didn’t want to ever be on a movie that was just sheer entertainment. They have to mean something.”

Producer Suzanne Buirgy acknowledges that none of this would have been possible without proprietary DreamWorks animation technology: “The software we’ve secured is incredible,” Buirgy says. “This combination of Premo, which is an amazing animation software, and MoonRay, a near-real-time rendering one, created wondrous animation renders that look incredible. It’s stunning that we are able to have representative lighting in them, which allowed us to look at scenes early on versus waiting for lighting later.”

Co-director Todd Wilderman was wowed by just how quickly the software allowed the team to understand what final sequences would look like. “Using Premo, head of character animation John Hill and his team moved so fast with the animation,” Wilderman says. “There are a lot of long shots and complex acting in this film. Back in the day, you didn’t have full fur when you were animating. You almost had something slick that looked like the Michelin Man. To experience Everest actually having full fur that made him look exactly the way he does in the movie…when we were just blocking out animation and approving performance? It was a dream. It allowed us to see the scene for what it was, make decisions quickly and approve animation much faster—and know it wasn’t a leap of faith. What we were seeing was what was going to get rendered and lit. Suddenly, he is in full costume. Same with the kids; they had full-on hair and weren’t just geometric shapes.”

It was crucial to the production that the film accurately highlight Chinese landscapes and culture, from the glistening buildings of the big city to the countryside, with beauty, artistry and precision. That process was divided equally between DreamWorks Animation in America and Pearl Studio in China. Production designer Max Boas would work with the team at Pearl Studio on specific design elements—like Yi’s apartment and bedroom—and together, the teams would go to painstaking lengths to make it as realistic as possible. Boas and his team in Glendale, California, sought out the input and feedback from the team at Pearl throughout the course of production. This unique East/West creative collaboration between the two partner studios brought a vibrant China to life through animation as it has never been captured before on the big screen.