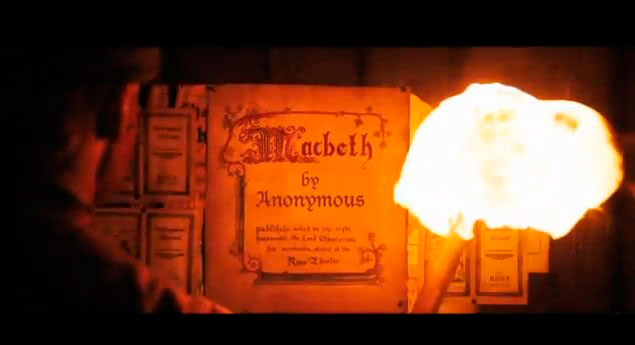 Anonymous is a historical thriller directed by Roland Emmerich. It stars Rhys Ifans and Vanessa Redgrave.  It is produced by Centropolis Entertainment and Studio Babelsberg, and distributed by Columbia Pictures. 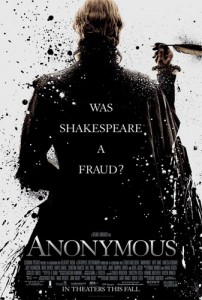 In response to news that the film Anonymous was in production, James Shapiro, Columbia University English professor and author of Contested Will: Who Wrote Shakespeare?, wrote in the Los Angeles Times titled “Alas, Poor Shakespeare.”

Screenwriter John Orloff had penned the script back in the late 1990s, but it was shelved after Shakespeare in Love came out in 1998. It was almost greenlit as “The Soul of the Age” for a 2005 release, with a budget of $30 to $35 million. However, the financing proved to be “a risky undertaking,” director Roland Emmerich told Screen Daily at the time. In October 2009, Emmerich stated, “It’s very hard to make get a movie like this made, and I want to make it in a certain way. I’ve actually had this project for 8 years. It’s always supposed to be my next movie, but this time I’m really going to do it because I’m already set to shoot on March 22 2010.”

Set in the political snake-pit of Elizabethan England, Anonymous speculates on an issue that has for centuries intrigued academics and brilliant minds such as Mark Twain, Charles Dickens, and Sigmund Freud, namely: who actually created the body of work credited to William Shakespeare?  Experts have debated, books have been written, and scholars have devoted their lives to protecting or debunking theories surrounding the authorship of the most renowned works in English literature.

Anonymous poses one possible answer, focusing on a time when scandalous political intrigue, illicit romances in the Royal Court, and the schemes of greedy nobles lusting for the power of the throne were brought to light in the most unlikely of places: the London stage.

Elizabethan London was recreated for the film with more than 70 painstakingly hand-built sets at Studio Babelsberg. These include a full-scale replica of London’s imposing The Rose theatre. The remainder of the Elizabethan setting was created and enhanced via CGI.

The film is the first major motion picture to be shot with Arriflex’s new Alexa camera, a competitor to the RED One.

n a June 2010 post-filming interview with the Washington Post, Derek Jacobi, who plays the Narrator of Anonymous, noted that he is not neutral in the Shakespeare authorship debate. “I’m on the side of those who do not believe that the man from Stratford-upon-Avon wrote the plays. I think the name was a pseudonym, certainly. [Anonymous] puts the authorship question firmly and squarely on the big screen. It’s a very risky thing to do, and obviously the orthodox Stratfordians are going to be apoplectic with rage.“