Screenwriter Hossein Amini makes a stylish directing debut with this sleek thriller set in Greece and Istanbul, 1962, and adapted from a novel by Patricia Highsmith, The Two Faces of January centers on a wealthy American couple (Viggo Mortensen) and (Kristen Dunst) on a tour of Greece in the 1960’s. There they meet a con-artist (Oscar Isaac) who becomes entranced with the couple’s wealth and beauty. 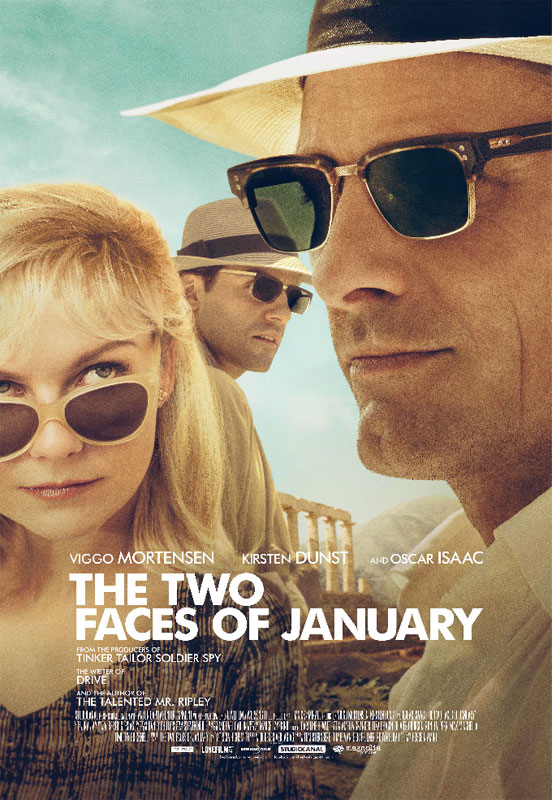 To compose the film’s score, Amini selected Alberto Iglesias, who has worked extensively with Pedro Almodovar.

Regarding his desire to direct The Two Faces of January, Hoss, as he’s known to most, would clarify that becoming a director wasn’t the chief attraction, it was specifically this story he wanted to tell. Shortly thereafter, in a meeting with Tom Sternberg. Amini shared his ambitions but explained that he wasn’t making any headway with the late author’s publishing house, Diogenes, to secure the option. Sternberg had an existing relationship with Diogenes, which is highly protective with the late author’s works. “I was moved by Hoss’s passion and said, ‘Okay, let’s do it,’” says Sternberg. “The negotiations took a long time and the rights were optioned at a reasonable cost.”

After the script began circulating, it quickly ended up in Viggo Mortensen’s hands. The actor met with Amini at his home in Madrid late in 2010, enthusiastically attaching himself to star as Chester MacFarland and remaining steadfast throughout efforts to get the film in front of the camera. “He has been incredibly gracious and generous throughout the whole process,” says Amini. “He’s been a real partner.” After Viggo Mortensen committed to playing Chester MacFarland, Amini slightly tweaked his conception of the character. “Viggo looks heroic and there’s an element of Gatsby in the character, which doesn’t exist in the book so much,” says the British-Iranian Amini.

Oscar Isaac was the next to sign on as Rydal Keener. The two men had worked together on Nicolas Winding Refn’s stylish thriller Drive.  But although Amini was going around in circles trying to find the right actor to portray the small-time conman who falls under the MacFarland’s glamorous spell, Isaac admits that when Amini first let him read the script while they were on Drive, “it would have been unrealistic for me to expect to play Rydal”.

None of the stars were concerned about Amini’s inexperience behind the camera. “It didn’t feel like we were working with a first-time director at all,” says Mortensen. For Amini, the most challenging aspect of the entire production was sitting in the editing suite and trying to craft the suspenseful narrative with his editor. He confesses to feeling a bit of “snow blindness” in the early stages as he toiled to find the right balance and fine-tuned the narrative.

The Two Faces of January  went into production in October 2012 on the island of Crete. Highsmith’s thriller stretches across the Continent, taking in Paris, Istanbul and Greece, the Cradle of Civilization. Because of the economic meltdown in Greece at the time and the resulting anti-government demonstrations, the production at first looked to shoot entirely in and around Istanbul before transferring to Ealing Studios in London for interiors.

The $21m production ended up filming for three weeks in Crete, four days in Athens and four weeks in Istanbul, before finishing off with two weeks at Ealing Studios.