Miles of twisting catacombs lie beneath the streets of Paris, the eternal home to countless souls. When a team of explorers ventures into the uncharted maze of bones, they uncover the dark secret that lies within this city of the dead. A journey into madness and terror, Legendary Pictures’ As Above/So Below reaches deep into the human psyche to reveal the personal demons that come back to haunt us all. 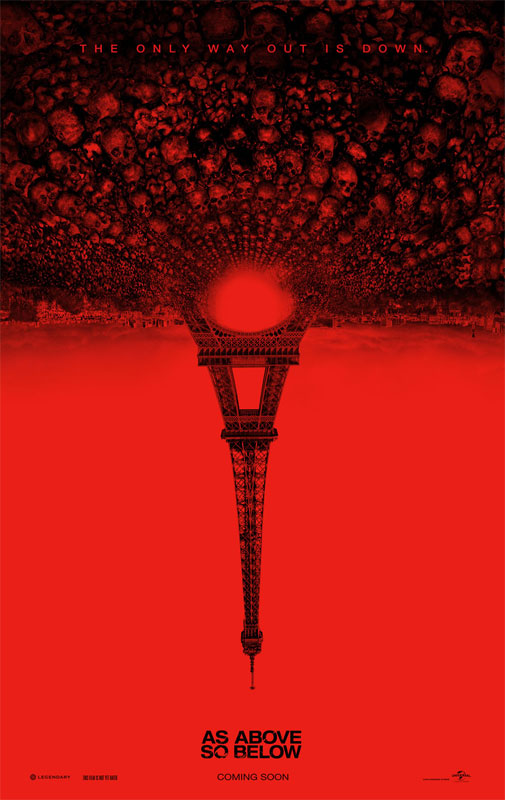 Lensed on a lean-and-mean shooting schedule, As Above/So Below took less than two months to complete principal photography.

Producers Thomas Tull and Jon Jashni, who have built Legendary Pictures on the foundation of creating credible, mythic story universes, have established a track record of delivering intelligent, sophisticated filmmaking that elevates genre properties. Their first film of the Legendary distribution deal with Universal Pictures, the micro-budgeted As Above/So Below,marks a welcome entry into the canon. Working with fellow producer Patrick Aiello, wthe filmmakers bring this terrifying thriller to life with brothers John Erick Dowdle and Drew Dowdle.

Partnering to write As Above/So Below, they drew upon real-world touch points, ones inspired by centuries of myth and legend. The director John Erick Dowdle describes that he and his brother had long had an idea to take a character named Scarlett Marlowe, a modern-day Indiana Jones, and create a story that is based around her. When he received a call from Tull about setting a film in the Paris Catacombs, it all clicked for both the Dowdles and they began the screenplay.

The core cast in As Above/So Below consists of six characters who become trapped by their most intimate fears inside the Catacombs, an astonishing 220 feet belowground. For the Dowdle brothers, it was important to find just the right actors to create the story they were looking to tell…and getting the performers to trust them with an unorthodox process. The filmmakers began with casting the role of Scarlett, a British scholar of archaeology and rebellious thrill-seeker who is driven by the death of her father.

When all was said and done, approximately 300 actresses read for the role. They searched Los Angeles, Paris and London…and finally found Welsh actress Perdita Weeks. After meeting with Weeks, it became clear that she was their lead. Little did John and Drew know, Weeks had submitted two auditions—one as a blonde and one as a brunette. John went to Drew and said he found their Scarlet and she had blonde hair, while Drew said he had found her and she had brown hair. It turns out that they were talking about the same woman. Weeks knew that much would be expected of her during the shoot. Not only would she be required to spend hours in makeup, she’d be slogging through wet mud for a good chunk of the production.

After locking in Weeks, filmmakers sought out Ben Feldman to portray George—an archaeological vigilante who is fluent in Aramaic and spends his days fixing historical (and prohibited) landmarks. Ben Feldman fell in love with the script at first read. He admits that he shares many traits with his character. To play Benji, Scarlett’s claustrophobic cameraman, documentarian and partner in crime, filmmakers looked to up-and-comer Edwin Hodge, who is familiar with the genre through his work in both films in The Purge series.

As Above/So Below has earned the impressive distinction as the first production to get permission to shoot in the actual Catacombs. Both the area that is accessible to visitors and the area that is off-limits to the general public were made available by the generosity of the French government. The Dowdles commend Legendary for supporting their objective to film there.

With an international team in play—from a French cinematographer and German assistant director (William Pruss) to an Italian first assistant camera (Pierluigi De Palo) and full French crew—the production was truly a global one. And everyone did their part, and then some, during the shoot.