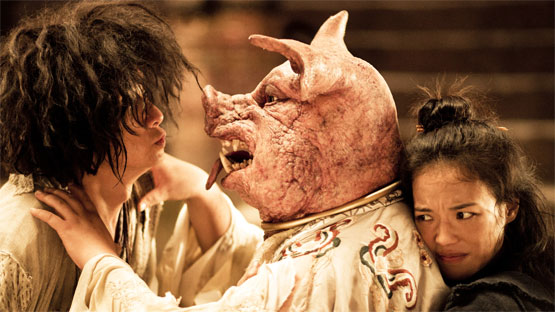 This is a world plagued by demons, who cause its human inhabitants unspeakable suffering. Young demon hunter Xuan Zang, fearlessly guided by his belief in “giving himself for the greater cause”, risks his all and conquers a water demon, a pig demon and the demon of all demons, Sun Wukong. He embraces them as his disciples, and melts them with love. Meanwhile, Xuan Zang discovers the true meaning of Greater Love himself. In order to atone for their own sins and save the common people, the four of them embark on a journey to the West that’s full of challenges… 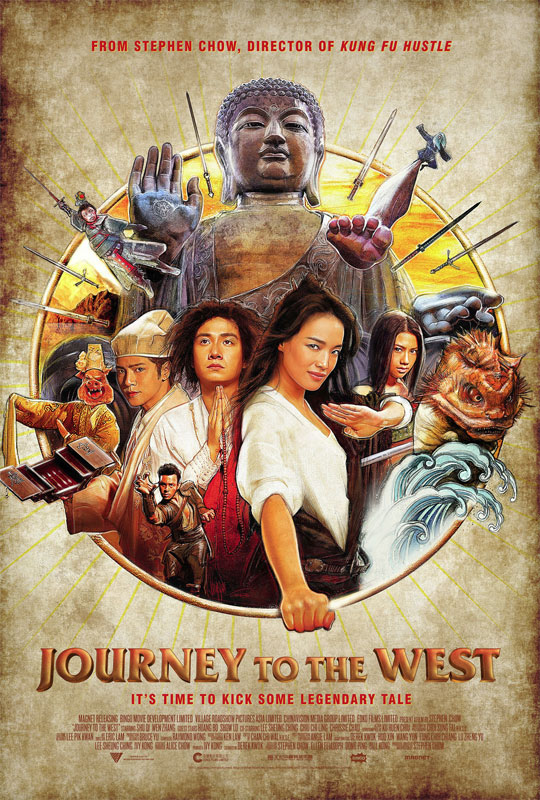 The film set several records at the Chinese box-office. The film was released on February 10, 2013 in China and opened to 78 million Yuan ($12.5 million) on its first day, thus overtaking the 70 million yuan ($11.2 million) opening-day record set by Painted Skin: The Resurrection on June 28, 2012 as the biggest opening-day gross for a Chinese film.

[accordion][acc title=”300 Nursery Rhymes is a very interesting invention. It’s supposed to be just a songbook for children. But it becomes a super-powerful demon-hunting tool in the film. How did you come up with the idea?”]Since I was a kid, I’ve always liked singing nursery rhymes. I was also once a well-known TV host for children’s programs. Nursery rhymes are the love of my life. So they became part of the story. I wanted the demon-conquering stunt to be something cute and childish, and touching in the demons’ eyes. That’s how I thought of nursery rhymes. [/acc]
[acc title=”There are some other powerful weapons in the film, like the Infinite Flying Rings. What inspired that?”]The Infinite Flying Rings first appeared in the film Buddha’s Palm. Able to change flying direction mid-air, they were created as a weapon to counter the great Buddha’s Palm. But in the end, they were no match for Ten Thousand Dancing Buddhas – the ninth palm position in Buddha’s Palm. Even so, they’re still a very powerful weapon. I liked the idea a lot and borrowed it.[/acc]
[acc title=”Everyone was looking forward to seeing your performance in Journey. But you’ve ended up not appearing in the film at all. Why did you choose to just direct and not act?”]The main reason is that Journey is a very challenging project. I thought about it a lot. I needed to be 100% focused if I wanted to make a good film about this subject matter. I’ve tried directing and acting simultaneously several times before. But I felt that if I did that again, I wouldn’t be able to make a great film with this story. So in the end, I chose to give up acting and concentrate on making the best film I could.[/acc]
[acc title=”In each and every one of your previous films, there are a lot of memorable lines. Is there any dialogue in Journey that’s special and that you’re particularly proud of?”]There is lots of good dialogue in Journey. My favorite has to be “Forever is too long. Seize the moment.” It resonates with A Chinese Odyssey from more than ten years ago. At the same time, it’s also a new look at love.[/acc]
[/accordion]

Q&A with the Gang of Demon Hunters

[accordion][acc title=”How did Stephen Chow find you?”]Wen Zhang: At first, Mr. Bill Kong called me. I was in Singapore for business when he called. He wanted me to find time to fly to HK and meet with Mr. Chow. I heard that he was going to make a film. So I thought maybe he was casting for it. But I had no idea why he wanted to see me. And when we met in Hong Kong, we were just chitchatting. He asked if I had any friends in Hong Kong, whether I was eating well and getting enough sleep, what I was planning to do and whether I had watched and liked A Chinese Odyssey. I didn’t hear from him for a long time. Maybe a month before shooting started, he sent me the script and asked me to read it. I didn’t know which role I would play until days before we started shooting. And the next time I saw him was in Heng Dian.

Huang Bo: I turned it down at first, because I felt that Stephen Chow’s Monkey King was already so deeply entrenched in the audience’s memory. Everyone loved that Monkey King, and it would be very challenging for anybody to take on the role again. Also people would inevitably compare your performance to that of the previous Monkey King, which would be limiting, I thought. But in the end, Mr. Chow tricked me into doing it (laughs). He asked me how I would reprise the role and I shared my thoughts with him. He then told me, “Good ideas. Better than mine. Come and just act in the way you described.” And there I was.[/acc]
[acc title=”Stephen Chow’s films never follow the rules. What was it like working with him?”]Shu Qi: You can go wild and crazy with your role in a Stephen Chow film. So in Journey, I tried to act in an exaggeratingly comedic way for the first time. Like when you walk into a forest and boom, a monster jumps out at you. You need to be ready, and fight it. It’s really satisfying.

Stephen would demonstrate how to act for each scene. So when we were shooting, I’d watch him perform first before I did it. It feels like you saw it first. Whatever you need to do, you’ve seen in the theater already, but it’s someone that you (the audience) won’t get to see. Wow!

Wen Zhang: Xuan Zang is a heavy-duty role. He’s in almost every scene. I found the script very interesting, tears and laughter in one role. At first, I couldn’t find the “right” performance. By “right”, I mean the style of comedy of a Stephen Chow film. It was very hard to hit the mark at the beginning. The first week of shooting was torture. I spent a lot of time talking to Mr. Chow about the character and how to find ways to make it funnier. He would help me sort out various ways to interpret the character. So I think Mr. Chow is really a master of comedy. He gives actors a lot of space. If this were the same Xuan Zang as Master Law Kar Ying’s, he wouldn’t have come to me.

Huang Bo: Stephen Chow is a legend! As an actor, I never imagined that I would be working with Stephen someday. Once you talk to him, you realize he’s a very intelligent person. As a comedy actor, or rather a comedy director now, he’s brimming with humor, which is really important. I feel very privileged to have had this opportunity to work with him. I learned a lot from him as a filmmaker too. He has extremely high standards for everything and won’t just settle for the easy solution. He’s always trying to create something better. The character Sun Wukong, for example, was supposed to have been locked in the cave for 500 years. So he had to look like it — bald, old and pale.[/acc][/accordion]

[toggles title=”Can you please tell us about the computer-generated demons?”]The main reason is that Journey is a very challenging project. I thought about it a lot. I needed to be 100% focused if I wanted to make a good film about this subject matter. I’ve tried directing and acting simultaneously several times before. But I felt that if I did that again, I wouldn’t be able to make a great film with this story. So in the end, I chose to give up acting and concentrate on making the best film I could.[/toggles]