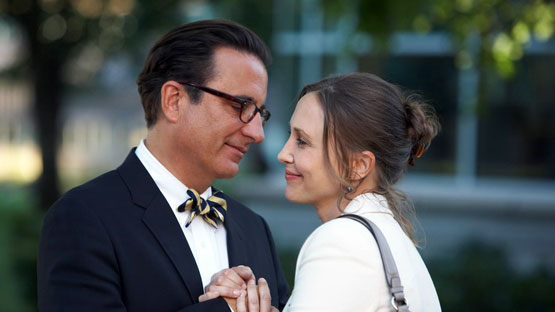 Academy Award® nominees Andy Garcia and Vera Farmiga star as straight-laced George and eccentric Edith, two strangers who meet on their children’s campus tour at the idyllic Middleton College. A light-hearted romance for adults on the surface, At Middleton is a deeply moving portrait of roads not taken and the timelessness of youth. Taissa Farmiga, Spencer Lofranco, Peter Riegert, and Tom Skerritt also star in this story about what can happen on your first day of college – no matter who you are. 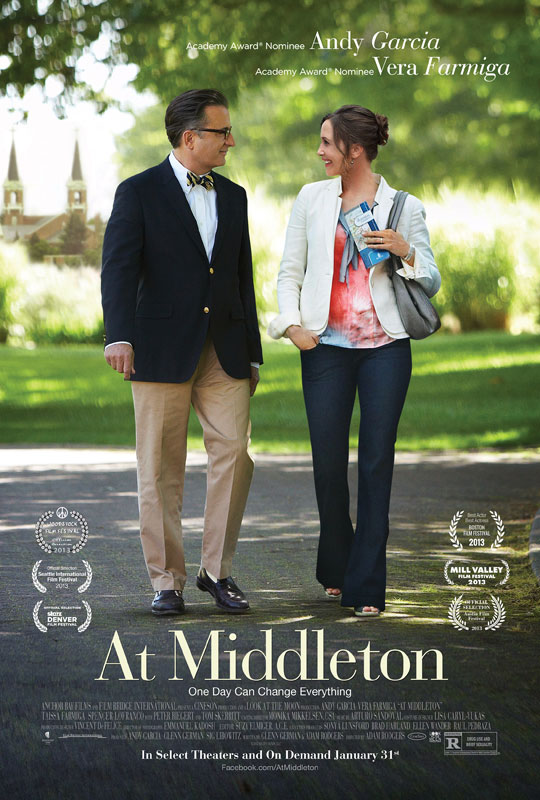 At Middleton premiered at the Seattle International Film Festival on May 17, 2013

Years ago, when director / co-writer Adam Rodgers was on a tour of colleges with his father, he met a girl whose quirky exuberance absolutely captivated him. So much so, he followed her off the tour and together, they spent a few hours alone wandering the campus and bonding over their shared experience.

It always felt like the seed of a movie, but then there was a key “what if” moment. What if it were the two parents who left the tour and shared a magical few hours together? Five years later, Andy Garcia and Vera Farmiga beautifully brought to life “George Hartman” and “Edith Martin,” two wildly different personalities whose paths cross at idyllic Middleton College.

In addition to playing the lead, Andy Garcia also came on board as a producer and was instrumental in attracting several key creatives. Director of Photography Emmanuel Kadosh served as cinematographer on two previous Garcia projects, Modigliani and The Lost City. His commitment to the use of natural light was a perfect fit for the film set on campus. Composing the score for the film is jazz legend Arturo Sandoval.

Producer Sig Libowitz, a former executive at Good Machine, Film Four and Paramount, was well-versed in navigating the world of independent filmmaking. ” Glenn and Adam’s screenplay was the key. The honesty and humanity of their story and characters attracted Andy, Vera and everyone else to the movie – which was vital since we were indie-financed. Everyone pulled together and created a close and collegial set, which helped allow the romance to come to life.”

Having only twenty days to shoot a behavioral feature film can be daunting, but Rodgers had a very specific vision about what he wanted the movie to be. Within the framework of the story, he allowed the actors freedom to fully realize these multi-dimensional characters. “I still have a 20 year-old piece of scratch paper from NYU, something someone told me about directing – ‘Drive the car, but with a loose grip on the wheel.’ You can’t storyboard chemistry, and having the kind of acting talent we were lucky enough to attract made my job a pleasure.”

It was crucial to find just the right setting that could serve as a backdrop to this unexpected romance, and the filmmakers found what they were looking for in Eastern Washington. Gonzaga College in Spokane, and Washington State University in Pullman have been seamlessly stitched together to create the fictional Middleton.