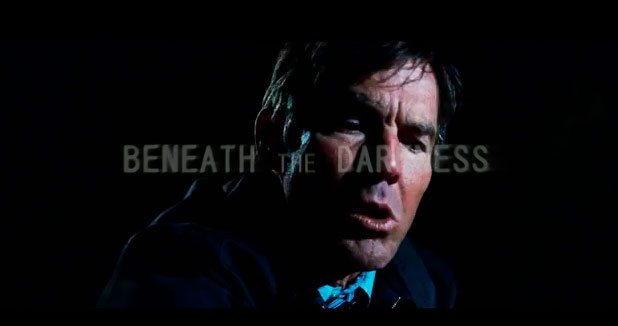 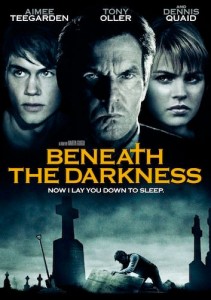 Beneath the Darkness: After the death of his best friend, 16-year-old Travis struggles to expose the grim secrets surrounding a “haunted house”.

In the movie, Beneath the Darkness, Ely Vaughn (Quaid) is a pillar of the community in tiny Smithville, Texas. The town’s mortician, Ely has been revered since his days as the high school’s star quarterback. But since the tragic death of his wife two years earlier, Ely has withdrawn from his neighbors, while local teens spread stories of supernatural goings on at Ely’s mansion – which is also the funeral home.

When high school friends Travis (Oller), Abby (Teegarden), Brian (Lunsford) and Danny (Werkheiser) decide to check out the rumors, they are shocked to see the supposedly grieving widower dancing with a mysterious woman behind the curtains of his bedroom window.

Their curiosity aroused, the four teens wait for Ely to leave the house before breaking in to investigate. But instead of finding clues to the woman’s identity, they stumble on a grotesque, long-hidden secret. The sadistic mortician next door will now stop at nothing to literally bury his past.

On November 19, 2010, Martin Guigui was named as the director and co-producer of the project. Guillermo Del Toro cast Globe Award and Nominee Award actor Dennis Quaid for the lead role of Ely on November 20, 2010. On November 25, 2010, Guigui announced via Facebook that pre-production had begun on the project, which is being financed by Sunset Pictures. On November 20, 2010, Tony Oller was cast for the lead role of Travis. TV Series star Devon Werkheiser was cast on November 21, and was joined one week later by actress Aimee Teegarden and American actor Brett Cullen. Filming began on November 22, 2010 in Austin, Texas, with other scenes being shot in Smithville, Texas.