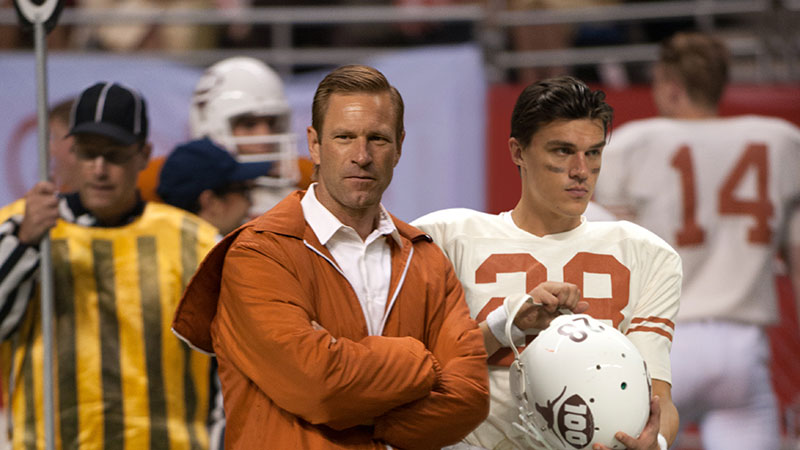 Freddie Steinmark (Finn Wittrock) doesn’t look like your usual star athlete. Diminutive in size and stature, he has to train harder than everyone else to be a competitor. Supported and driven by his father, who runs him through drills and extra practice whenever possible, Freddie’s discipline towards his athletic pursuits is only surpassed by his desire to win. That fighting spirit serves him well, making him a three-letter jock in baseball, basketball and football at Wheat Ridge High School in suburban Denver. 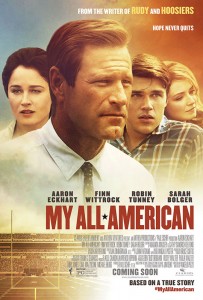 Over a month before production began, football coordinator Mike Fisher started his training camp, intense drills and workouts to get former players back into game shape while the veteran football “choreographer” also rehearsed the historic plays he needed to stage for Pizzo’s cameras. And these drills were not only for the 45 former players who portrayed the rosters for UT, Arkansas, Oklahoma, Texas Tech, Rice, Baylor and other school teams in the story, but also the actors playing key Longhorns in the film as well.

Executive producer Bud Brigham is a geophysicist and a successful gas-and-oil company executive who was just a youngster growing up in Austin when Freddie Steinmark’s story unfolded in the late 1960s. A graduate of the University of Texas (Class of ‘83), he founded Anthem Productions, a production company whose mission is to bring wholesome and inspiring messages to the screen.

“I heard about Freddie’s story when I was a boy,” Brigham recalls. “I remember when Texas won that national championship, and then what happened to Freddie afterward. It’s something that everybody knows about here in Texas. ”

Through his gas and oil business, Brigham already knew Mike Campbell who, with twin brother Tom, played alongside Steinmark on the team’s defensive squad during that 1969 championship season. Through the fraternal siblings, Brigham met entrepreneur Tony Jones, who held the movie option on Texas sports-writer Jim Dent’s book about Freddie,Courage Beyond the Game: The Freddie Steinmark Story. He, along with Jones and the Campbell twins, worked together with other UT alums to engage independent investors, assisted in part by Colt McCoy, a former All-American QB, Heisman Trophy finalist at UT and current QB for the NFL’s Washington Redskins.

Jones, a fledgling producer with a background in college football (he was a stand-out at Baylor), had obtained the film rights with the single-minded goal of pitching the project to Angelo Pizzo, writer of the iconic sports films HOOSIERS and RUDY. Of all places, Jones connected with Pizzo over Facebook, which led to an in-person meeting in Pizzo’s hometown of Bloomington, IN and a commitment to write the screenplay.

Writer-Director Pizzo was further intrigued by the notion of taking a story that was well-known locally and bringing it to a broader audience, similar to what he had done with HOOSIERS. While he notes that author Dent’s book was very comprehensive in depicting Freddie’s story, he pursued his own research for the script, which involved meeting people from the era in which the story is set, including members of the 1969 Longhorns. He also traveled to Denver to meet and talk with Steinmark’s mother Gloria and his younger brother Sammy to get more personal insight into the hero of his movie.Rounding out his research for the screenplay, he spent time with Coach Royal’s widow Edith, whose stories had great impact on the final film and whose approval of the script meant the world to the production.

With all the touching testimonials that came in researching the real life Freddie Steinmark, it was a challenge for the filmmakers to find someone who could do the role justice. “Casting this movie was intimidating,” producer Paul Schiff admits. One would imagine it could be equally daunting for any young actor to take on playing the role of Freddie on-screen. But Finn Wittrock, the 29-year-old Juilliard grad whom Pizzo drafted to tackle the role, “immersed himself in all things Freddie,” observes the director. Finn Wittrock, the son of a Shakespearean acting teacher, researched Steinmark first on Google, saying, “That’s what modern-day actors do to get the gist of a story or person.” In talking to Steinmark’s former teammates for his research, Wittrock says the memories “are still so raw for them. It’s still like they remember every play of that game, you know?”

Co-star Aaron Eckhart also felt a huge responsibility in bringing to life the great Texas football coach, Darrell K Royal (1924-2012), Freddie’s key counterpart in the film. The irony of that commitment was not lost on the award-winning actor as soon as he set foot in Austin to begin research and rehearsals before filming began. “It’s a funny story,” Eckhart offers, “I went to a steakhouse in town. I look up from where I was seated and there’s an oil painting of Darrell Royal, almost like he was looking down at me. I got a pretty good indication of how well respected he was.”

MY ALL AMERICAN filmed entirely in the state of Texas, beginning on May 19, 2014. In addition to key sequences mounted on UT’s sprawling campus in Austin — notably, the West Mall adjacent to the school’s famous clock tower — the company also traveled to San Antonio, staging the climactic “Big Shootout” contest between UT and the Arkansas Razorbacks at the Alamodome, doubling for Razorback Stadium in Fayetteville.

The filmmakers also spent a week on location in the Dallas-Fort Worth area, working in both The Cotton Bowl and TCU’s handsome Amon G. Carter Stadium, which doubled for several different college arenas. The 40-day shoot concluded in mid-July back in Austin at both the Austin Film Studios and at a pair of local high schools where production designer Bruce Curtis created the hospital interiors for Houston’s Anderson cancer clinic, and a close replica of Royal’s office suite at UT.

Pizzo states that the last thirty minutes of his film contain no football action. The huddles among folks from that point on are strictly emotional as he depicts the tragic side of Freddie’s journey. Pizzo feels that if a filmmaker has a powerful final ten minutes onscreen, he has a movie. Period. “And, we have those ten minutes,” he believes.