Writer/director Jeff Nichols proves again that he is one of the most compelling storytellers of our time with the sci-fi thriller “Midnight Special.” A provocative, genre-defying film as supernatural as it is intimately human, it follows a father, Roy (Michael Shannon), who goes on the run to protect his young son, Alton (Jaeden Lieberher), a boy with mysterious powers that even Roy himself cannot comprehend. 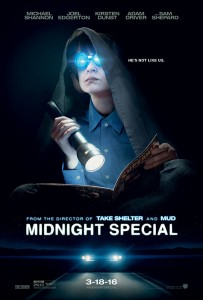 Throughout principal photography, New Orleans and much of the South was gripped by record-breaking low temperatures. With a narrative heavy on road work and exterior locations, the shooting schedule was constantly being revised for rain and freezing temps.

“I wanted to make a chase movie, a movie about guys moving on back roads through the American South in a fast car, driving at night with their lights off,” Nichols begins, setting the stage for characters embarking on a collision course with something bigger than they imagine.

For Nichols, the idea for “Midnight Special” harks back to a profoundly traumatic moment when his year-old son had a sudden medical emergency, plunging him into a panic. The situation was resolved and the boy was fine, but that agonizing experience brought a flood of fears and insights to the first-time father, some of which Nichols sought to express in the film. “I realized that having a child means giving up a part of yourself to the universe,” he says.

Traveling with Alton are his father, Roy, played by Michael Shannon, and Roy’s childhood friend Lucas, played by Joel Edgerton. Along the way they enlist the support of Alton’s mother, Sarah, played by Kirsten Dunst. Committed to help Alton fulfill his destiny, they will leave behind the lives they knew and do things they never thought possible in a race towards a destination and an appointment that calls only to him. Barely a step behind are the police and the FBI, as well as the NSA, in the form of agent Sevier, played by Adam Driver, and the single-minded devotees of the Third Heaven Ranch, led by Sam Shepard as the charismatic and cagey Calvin.

“I appreciate the ambiguity of it,” declares Shannon, who has played an integral part in each of Nichols’ previous films and returns to take the lead in “Midnight Special.” Nichols, who cites the mood and style of such 1980s sci-fi classics as “Starman” among his artistic influences and inspirations, says, “There’s the suggestion that Alton is meant for something or somewhere else, that his powers are symptoms of what he’s meant to do.”

Producer Sarah Green, marking her third collaboration with the director, notes, “There are many elements that go into what makes a Jeff Nichols film. The reason I’m so drawn to his work, like many people, is that he can make a satisfying genre film, he can make a drama, he can make any kind of film and, no matter what, it will be heart-based. It’s always about the human condition, and love. It’s about how we relate to each other in the most pure way.”

Nichols’ working relationship with Shannon is so well honed that they no longer rehearse. “I will talk for days about back-story, where a character comes from and where he’s going to end up five years from now. I enjoy that because I’m a writer and these are the relationships I created, so of course I want to sit down and talk about it,” Nichols admits. “Mike usually has one or two questions and that’s about it. He understands the character. So when we show up on set we don’t rehearse, we just start rolling. His style very much suits the way I write. He’s able to hold such emotion in his face. I don’t often have a lot of dialogue so something else needs to be going on, and Mike provides that for me.”

Casting the role of Alton led the filmmakers on a national search for a young actor who could reinforce that father-son bond with a minimum of dialogue. He would also have to be the conduit of an enormous, kinetic energy, while retaining the normal vulnerabilities of a child. Producer Kavanaugh-Jones recalls, “We did an exhaustive recruit with a local casting director out of Austin, Texas, and thought it was going to be one of those needle-in-a-haystack situations. Then, at the end of another long day, our casting director in Los Angeles said, ‘You really should look at Jaeden Lieberher. He worked on a Cameron Crowe movie and he’s spectacular.’”

“Jaeden is one of those rare young actors who is just uncanny,” Nichols concurs. “He came in and read for about five minutes, I talked to him and concluded that he was one of the smartest kids I’d ever met. He got it. He got the subtext and the situation; he knew what was going on. You can’t fake that level of awareness and intelligence.”

“Midnight Special” follows Roy, Alton, Lucas and Sarah from the Third Heaven Ranch in New Mexico through Texas, Louisiana, Mississippi and Alabama, on their way to a specific site near the Florida coast. Portions of the film were shot in almost all of these places but the majority of footage was captured in and around New Orleans, including the North Shore communities of Mandevill, Covington and Lacombe, in the winter of 2014.

Former Ranch member Elden, who has spent years studying Alton’s information in search of some unifying pattern, proffers the theory that they are geographic references possibly connected to Ley Lines – an ancient and supposedly mystic alignment of land masses around the world.
“It’s voodoo science, but who knows,” Nichols jokes, noting that “in fact, there is a convergence of these Ley Lines in Florida.”

Location manager Mark Welch estimates Nichols and his team scouted close to 60 different stretches of road. They used at least six highways in and around southern Louisiana, as well as deserted roads, logging roads, two-lane country roads and portions of interstates. Helicopters were used for aerial views of the action and onscreen as part of the police and military pursuit. Traffic control was an ongoing logistical challenge, often forcing production to shoot in three- or five-minute intervals. For one scene involving a police barricade and SWAT confrontation, a section of highway was briefly closed, while in other instances the crew employed a “rolling roadblock,” allowing vehicles to pass or follow 40 yards behind the process trailer and camera cars.