Black Swan is a 2010 American psychological thriller film directed by Darren Aronofsky. The film stars Natalie Portman and Mila Kunis as ballet dancers in a New York City production of Swan Lake. The production requires a ballerina to play both the innocent White Swan and the sensual Black Swan. Nina (Portman) fits for the White Swan and Lily (Kunis) fits for the Black Swan. When the two compete for the parts, Nina finds a dark side of herself. 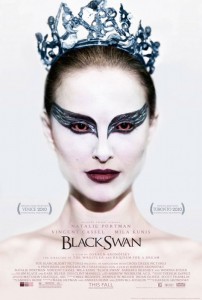 Benjamin Millepied, a principal dancer from New York City Ballet, debuted in Black Swan as both actor and choreographer. In addition to the soloist performances, members of the Pennsylvania Ballet were cast as the corps de ballet, backdrop for the main actors’ performances.

Aronofsky conceived the premise by connecting his viewings of Swan Lake with an unrealized screenplay about understudies and the notion of being haunted by a double, similar to the folklore surrounding doppelgängers. The director also considered Black Swan a companion piece to his previous film The Wrestler, with both films’ worlds involving demanding performances for different kinds of art. He and Portman first discussed the project in 2000, and after a brief attachment to Universal Pictures, Black Swan was produced in New York City in 2009 under Fox Searchlight Pictures. Portman and Kunis trained in ballet for months. Notable figures from the ballet world helped with film production to shape the ballet presentation. The film premiered as the opening film for the 67th Venice International Film Festival on September 1, 2010.

Aronofsky first discussed with Portman the possibility of a ballet film in 2000, and he found she was interested in playing a ballet dancer. Portman explained being part of Black Swan, “I’m trying to find roles that demand more adulthood from me because you can get stuck in a very awful cute cycle as a woman in film, especially being such a small person.” Portman also introduced Aronofsky to Kunis, whom he knew from the 2008 film Forgetting Sarah Marshall. Kunis contrasted Lily with Nina, “My character is very loose… She’s not as technically good as Natalie’s character, but she has more passion, naturally. That’s what [Nina] lacks.” The female characters are directed in the Swan Lake production by Thomas Leroy, played by Cassel. He compared his character to George Balanchine, who co-founded New York City Ballet and was “a control freak, a true artist using sexuality to direct his dancers”.

Portman and Kunis started training six months before the start of filming in order to attain a body type and muscular tone more similar to those of professional dancers.Portman worked out for five hours a day, doing ballet, cross-training, and swimming. A few months closer to filming, she began choreography training.Kunis engaged in cardio and Pilates. Kunis said, “I did ballet as a kid like every other kid does ballet. You wear a tutu and you stand on stage and you look cute and twirl. But this is very different because you can’t fake it. You can’t just stay in there and like pretend you know what you’re doing. Your whole body has to be structured differently.” Georgina Parkinson, a ballet mistress from the American Ballet Theatre, coached the actors in ballet. For certain scenes, American Ballet Theatre soloists Sarah Lane and Maria Riccetto were “dance doubles” for Portman and Kunis respectively. Aronofsky said during filming about Portman’s ballet performance, “She was able to pull it off. Except for the wide shots when she has to be en pointe for a real long time, it’s Natalie on screen. I haven’t used her double a lot.”

Aronofsky and Portman first discussed the ballet film in 2000, though the script was yet to be written. He told her about the love scene between competing ballet dancers, and Portman recalled, “I thought that was very interesting because this movie is in so many ways an exploration of an artist’s ego and that narcissistic sort of attraction to yourself and also repulsion with yourself.” On the decade’s wait before production, she said, “The fact that I had spent so much time with the idea … allowed it to marinate a little before we shot.” When Aronofsky proposed a detailed outline of Black Swan to Universal Pictures, the studio decided to fast-track development of the project in January 2007. The project did not come together at the studio, and Aronofsky would go on to shoot The Wrestler instead. After finishing The Wrestler in 2008, he asked Mark Heyman, who had worked for him on the film, to write Black Swan. By June 2009, Universal had placed the project in turnaround, generating attention from other studios and specialty divisions, particularly with actor Portman attached to star. Black Swan began development under Protozoa Pictures and Overnight Productions, the latter financing the film. In July 2009, actor Mila Kunis was cast in a lead role as a rival dancer to Portman’s character.

Fox Searchlight Pictures became the distributor for Black Swan. The film was given a production budget of $10–12 million, and principal photography began in New York City toward the end of 2009. Aronosky filmed Black Swan with a muted palette and a grainy style intended to be similar to The Wrestler. Part of filming took place at the Performing Arts Center at State University of New York at Purchase. The film’s score was composed by Clint Mansell, a long-time collaborator of Aronofsky’s, and Mansell built the score using elements from Swan Lake.