The bigger the risk, the bigger the payoff in Nerve, an exhilarating thriller set on the streets of New York City, where amateur daredevils compete in an all-or-nothing game that mines their online information to exploit their wildest dreams—and their deepest fears. 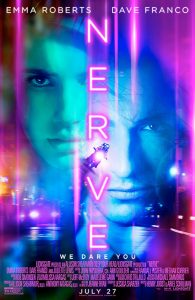 Main actors Emma Roberts and Dave Franco first met about five years ago, while filming a music video. Their genuine affection and respect for each other shines through on screen.

The directing team of Henry Joost & Ariel Schulman, best known for their work on Catfish and the Paranormal Activity series, have created an action-packed urban adventure that also offers keen insights into online behavior. “Our first film, Catfish, started a national conversation about the internet and identity,” says Joost. “This is a similar opportunity to talk about the way all of us, teenagers in particular, communicate these days. ”

Joost & Schulman first learned about the project from producer Allison Shearmur, who thought the filmmakers’ grasp of technology and youth culture made them the ideal directors for Nerve. “These are young filmmakers with a lot to say about their generation,” she says. “Their style of storytelling is of the moment, authentic and unique. The technology in the film is 10 minutes in the future, but the themes and situations are right this second.”

The more sinister side of the internet seemed like a topic that was ripe for exploration to actress Emma Roberts, who plays Vee. “People are putting their whole lives on the internet today,” she notes. “This movie captures that phenomenon and takes it one step further.”

Each game of Nerve lasts only 24 hours; then a winner is declared and it moves on to the next challengers. “The movie asks the audience the same question Vee asks herself,” says Schulman. “Are you a watcher or a player? Not just in the game of Nerve, but in life itself.”

The filmmakers drew on unconventional sources to find the inspiration for Nerve’s kinetic energy and pace, including amateur videos they found on YouTube. “Our key word in making this movie was ‘fun,’” says Joost. “We also wanted it to really embrace New York City, which you don’t see as much as you should on film anymore.”

Roberts recalls reading many scripts while searching for her next project, but says Nerve was the one that stood out. “It had all the elements of the movies I like to watch: It had a lot of action, it had a love story, it had a friendship story and it was set in New York City. There’s something so expressive about New York on film for me.” When she met with the co-directors to discuss the film, Roberts was impressed by their preparation, especially when it came to the movie’s innovative visuals. The directors say they pushed Roberts to the limit for this role and she went for it. “She was looking for something that challenged her physically and emotionally,” Schulman says.

Vee’s first dare is to kiss a mysterious stranger, who turns out to also be a player. The first meeting between Vee and Ian, played by Dave Franco, feels like an electrifying blind date. “I’ve done primarily comedies in the past,” says Franco. “This is a little bit more of a serious part even though there is a lot of humor. I wanted to do something romantic, but unusual.” Even scarier for Franco was Ian’s first scene, in which he has been dared to serenade a beautiful young woman: Vee. “That’s the scene I was most anxious about because I don’t have the best singing voice,” Franco admits.

Emily Meade, who plays Vee’s outgoing best friend, Sydney, says the script won her over immediately. “I found myself really caring about what was happening to these people. It has a combination of excitement and humor and heart, as well as interesting, layered characters.” Meade and Roberts worked together on the 2010 crime thriller Twelve and have been friends ever since.

The directors have also worked in a series of sly cameos from a number of internet stars, including comedian and social-media personality Josh “The Fat Jew” Ostrovsky, Vine standout Arielle Vandenberg, YouTube filmmaker Casey Neistat and internet artist Chloe Wise. “The movie is about the internet and the creation of social-media stars, so it seemed appropriate to include a bunch of our favorites,” says Schulman.

Lifelong New Yorkers Joost and Schulman knew from the start that their hometown was the only place they could imagine filming Nerve. To add to the film’s verisimilitude, the directors gave their actors real dares and turned them loose. “We took Emily into Times Square, put a mike on her, and she went around messing with strangers,” says Schulman.

Stunt coordinator Stephen Pope recalls the process of creating some of the film’s most perilous dares. “We scoured the internet, looking for the craziest, dumbest things people are doing out there. We didn’t want to repeat anything that had already been done, so we put our own twist on everything.”

One of the most exciting sequences is Ian’s wild motorcycle ride down Park Avenue—blindfolded. “How are they going to find their balance?” says Pope. “How are they going to negotiate traffic and traffic lights? It makes everything more heightened. The scene ends at Grand Central Station, which is busy all times of day, so it was tricky to get everything just right. It was a bit challenging, but it came out really well.”