Kirsten Dunst and Jim Sturgess  star in Upside Down, an interplanetary dystopian romance about a young man’s search for the long-lost girl of his dreams. Written and directed by award-winning filmmaker Juan Solanas and set in twinned worlds with opposite gravities, the film puts an eye-popping, original twist on the classic tale of forbidden love. 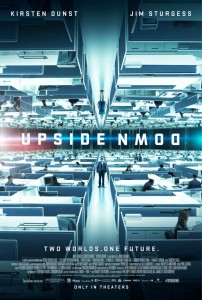 In such split-set scenes—and there are many in Upside Down—the filmmakers found it hugely challenging to get a believable, specific eye-line between two actors who were acting not only in different spaces and often at different times, but also in opposite gravities.

Upside Down began as a single image seen in a dream by writer-director Juan Solanas. “I saw this man on top of a mountain, looking up and seeing a woman on top of another mountain but upside down,” Solanas recalls of that seminal moment. “It left a strong impression on me.” From that image, Solanas began teasing out a story line, and soon knew he had found his next movie project. Almost immediately, he started writing down his thoughts, with the image ultimately becoming the all-important meeting of two star-crossed lovers living on twinned worlds and separated by opposite gravities.

The originality of Solanas’ concept and script also proved to be a great asset in attracting acting talent to the project. In casting the roles of Adam and Eden—the lovers kept apart by dual gravity as well as ruthless interplanetary border guards—the filmmakers turned to Jim Sturgess and Kirsten Dunst.

Bringing a little comic relief to the love story is the character of Bob Baruchowitz, a TransWorld employee from Up Top who befriends Adam and helps him in his quest to reunite with Eden. The filmmakers wanted an actor who could bring the right blend of quirkiness and empathy to the role, and they found it in veteran British comedic thespian Timothy Spall.

For Upside Down, the design process involved two parallel tracks of activity that fed into each other and spanned the Atlantic: On one hand, Solanas worked with a Paris-based visual effects house called La Maison, blocking scenes, and moving cameras and actors around in virtual space based on the environment design McDowell’s team was doing in Montreal. At the same time, Solanas’ work in Paris fed into what McDowell’s team was doing—for example, a new camera position might affect the design of a set.

Upside Down was shot in Montreal, a city the filmmakers say provided the best visual match for both worlds in the story. McDowell and Solanas spent a lot of time walking the city streets in search of details and corners that had the look they were going for and would drive the look of the film. Naturally, Up Top had a very different look and feel from Down Below. To find parts of Montreal that could correspond with the affluent upper planet, the filmmakers looked for architecture that was modernist and classic from the period between the 1930s and the 1990s. A key location was Place Ville Marie, a 47-story office tower and plaza built in the 1960s that is arguably the city’s most distinctive building. For the filmmakers, it established a look for the TransWorld tower and Up Top in general.

Kirsten Dunst says that’s the true power of the film: “It’s a movie that you can go to with your family and it’ll be like a beautiful spectacle,” she says. “Not in the sense of being in 3D or being overly dependent on special effects, but in a romantic, beautiful way that just sweeps you off your feet for a little while.”