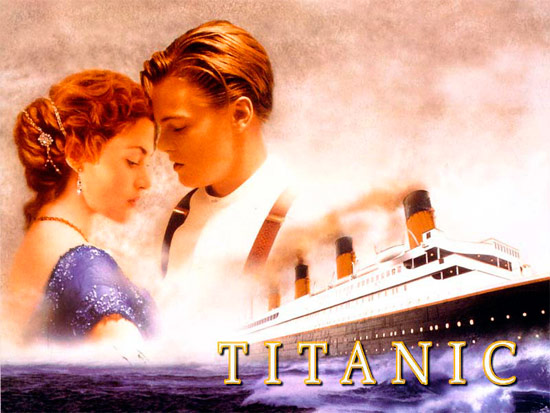 Titanic is a 1997  epic romance and disaster film directed, written, co-produced, and co-edited by James Cameron. A fictionalized account of the sinking of the RMS Titanic, it stars Leonardo DiCaprio as Jack Dawson and Kate Winslet as Rose DeWitt Bukater, members of different social classes who fall in love aboard the ship during its ill-fated maiden voyage. 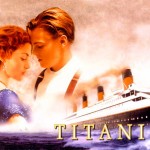 James Cameron was fascinated by shipwrecks, particularly the RMS Titanic, and wrote a treatment for the film. He said he made Titanic “because (he) wanted to dive to the shipwreck, not because particularly wanted to make the movie”.

Although the central roles and love story are fictitious, some characters are based on genuine historical figures. Gloria Stuart portrays the elderly Rose, who narrates the film in a modern-day framing device, and Billy Zane plays Cal Hockley, the overbearing fiancé of the younger Rose. Cameron saw the love story as a way to engage the audience with the real-life tragedy.

Production on the film began in 1995, when Cameron shot footage of the actual Titanic wreck. The modern scenes were shot on board the Akademik Mstislav Keldysh, which Cameron had used as a base when filming the actual wreck. A reconstruction of the Titanic was built at Playas de Rosarito, Baja California, and scale models and computer-generated imagery were also used to recreate the sinking.

The film was partially funded by Paramount Pictures and 20th Century Fox – respectively, its American and international distributor – and at the time, it was the most expensive film ever made, with an estimated budget of US$200 million.

James Cameron had a fascination with shipwrecks, and, for him, the RMS Titanic was “the Mount Everest of shipwrecks.” He was almost past the point in his life when he felt he could consider an undersea expedition, but said he still had “a mental restlessness” to live the life he had turned away from when he switched from the sciences to the arts in college. So when an IMAX film was made from footage shot of the wreck itself, he decided to seek Hollywood funding to “pay for an expedition and do the same thing.” It was “not because I particularly wanted to make the movie,” Cameron said. “I wanted to dive to the shipwreck.”

Cameron wrote a scriptment for a Titanic film, met with 20th Century Fox executives including Peter Chernin, and pitched it as “Romeo and Juliet on the Titanic”. Cameron stated, “They were like, ‘Oooooohkaaaaaay – a three-hour romantic epic? Sure, that’s just what we want. Is there a little bit of Terminator in that? Any Harrier jets, shoot-outs, or car chases?’ I said, ‘No, no, no. It’s not like that.‘” The studio was dubious about the idea’s commercial prospects, but, hoping for a long term relationship with Cameron, they gave him a greenlight.

Cameron convinced Fox to promote the film based on the publicity afforded by shooting the Titanic wreck itself, and organized several dives to the site over a period of two years. “My pitch on that had to be a little more detailed,” said Cameron. “So I said, ‘Look, we’ve got to do this whole opening where they’re exploring the Titanic and they find the diamond, so we’re going to have all these shots of the ship.” Cameron stated, “Now, we can either do them with elaborate models and motion control shots and CG and all that, which will cost X amount of money – or we can spend X plus 30 per cent and actually go shoot it at the real wreck.” The crew shot at the real wreck in the Atlantic Ocean twelve times in 1995 and actually spent more time with the ship than its passengers. At that depth, with a water pressure of 6,000 pounds per square inch, “one small flaw in the vessel’s superstructure would mean instant death for all on board.” Not only were the dives high-risk, but adverse conditions prevented Cameron from getting the high quality footage that he wanted. During one dive, one of the submersibles collided with Titanic‍ ’​s hull, damaging both sub and ship and leaving fragments of the submersible’s propeller shroud scattered around the superstructure. The external bulkhead of Captain Smith’s quarters collapsed, exposing the interior. The area around the entrance to the Grand Staircase was also damaged.

Descending to the actual site made both Cameron and crew want “to live up to that level of reality…. But there was another level of reaction coming away from the real wreck, which was that it wasn’t just a story, it wasn’t just a drama,” he said. “It was an event that happened to real people who really died. Working around the wreck for so much time, you get such a strong sense of the profound sadness and injustice of it, and the message of it.” Cameron stated, “You think, ‘There probably aren’t going to be many filmmakers who go to Titanic. There may never be another one – maybe a documentarian.” Due to this, he felt “a great mantle of responsibility to convey the emotional message of it – to do that part of it right, too“.

The film was originally scheduled to open on July 2, 1997, however, post-production delays pushed back its release to December 19 instead.Titanic was an enormous critical and commercial success. It was nominated for fourteen Academy Awards, eventually winning eleven, including Best Picture and Best Director. It became the highest-grossing film of all time, with a worldwide gross of over $1.8 billion, and remained so for twelve years until Cameron’s next directorial effort, Avatar, surpassed it in 2010. Titanic is due for theatrical re-release in 2012 after Cameron completes its conversion into 3-D.