Blue Valentine is a 2010 American romantic drama film written and directed by Derek Cianfrance that premiered in competition at the 2010 Sundance Film Festival. It is co-written by Joey Curtis and Cami Delavigne and stars Ryan Gosling and Michelle Williams. 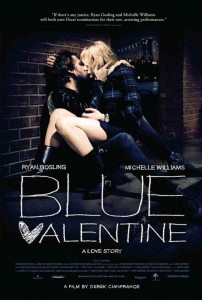 Blue Valentine centers on a contemporary married couple, charting their evolution over a span of years by cross-cutting between time periods.

A complex portrait of a contemporary American marriage, Blue Valentine tells the story of David and Cindy, a couple who have been together for several years but who are at an impasse in their relationship. While Cindy has blossomed into a woman with opportunities and options, David is still the same person he was when they met, and is unable to accept either Cindy’s growth or his lack of it.

Innovatively structured, the narrative unfolds in two distinct time frames, juxtaposing scenes of first love and youthful sexuality, with those of disenchantment and discord.

The script won the Chrysler Film Project, a competition that awards cash to an outstanding new feature film director, selected from over 550 submissions from across the country, overseen by Independent Feature Project, and evaluated by a panel of eminent film industry professionals.

The film was screened in the Un Certain Regard section at the 2010 Cannes Film Festival.  On October 8, 2010 Blue Valentine was officially given an NC-17 rating, reportedly due to an emotionally intense sex scene.However, the Weinstein Company appealed the decision and aimed for an R without any trims to the film since an NC-17 rating would significantly harm the film’s potential box office take. The company’s appeal was successful on December, 8, 2010 and the film received an R rating by the MPAA.

Blue Valentine was scored by Brooklyn band Grizzly Bear. The film is also shot on shaky cam technique throughout, giving it a raw and realistic tone.