Water for Elephants is a drama film based on Sara Gruen’s novel of the same name, directed by Francis Lawrence and starring Robert Pattinson as Jacob Jankowski, Reese Witherspoon as Marlena and Christoph Waltz as August. Hal Holbrook will play the older Jacob Jankowski. 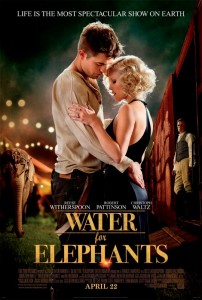 In Water for Elephants, a veterinary student abandons his studies after his parents are killed and joins a traveling circus as their vet.

A veterinary student from the wrong side of the tracks, Jacob, meets and falls in love with Marlena, a star performer in a circus of a bygone era. They discover beauty amidst the world of the Big Top, and come together through their compassion for a special elephant. Against all odds – including the wrath of Marlena’s charismatic but dangerous husband August – Jacob saves Marlena from an unhappy life and they find lifelong love.

Lawrence and producer Erwin Stoff brought the project to noted screenwriter Richard LaGravenese, an Oscar nominee for his work on The Fisher King, to adapt Gruen’s book. They were well aware of the challenges and responsibilities of being entrusted with a beloved story and cast of characters, and of paring down a 400-page book into a workable screenplay. Working under Lawrence’s guidance, LaGravenese fine-tuned the screenplay over several drafts. Their key task, says LaGravenese, was “making the three principal characters more active, and re-inventing Marlena’s and August’s backstories. We wanted every character’s reasons to be understood, so that morally, who’s right and who’s wrong, is a little more complex. No one is 100 percent innocent.”

In realizing Lawrence’s vision of circus life during the Great Depression, the director and his design chiefs worked to merge the rigorously authentic with the hauntingly romantic.

The principal set was constructed in Piru, California. The Southern California location was chosen for its close proximity to the exotic animals required by the story, as well as for its access to railroad cars and tracks. The company also filmed in various other Southern California locations, including the Twentieth Century Fox backlot, which was home to a glorious circus parade. The production also made a quick stop in Chattanooga, Tennessee, to make use of some period trains.

The filmmakers already had been given a head start in their design work, courtesy of the sharp detail and descriptions in Sara Gruen’s novel, many of whose readers felt like they were experiencing the sights, sounds and smells of a struggling ‘30s circus. Production designer Jack Fisk, whose frequent collaborations with renowned filmmaker Terrence Malick are noted for their creations of natural, real and textured worlds; director of photography Rodrigo Prieto, whose meticulous attention to visual and dramatic detail are evident in such films as Amores Perros, Brokeback Mountain and the recent Wall Street: Money Never Sleeps; and costume designer Jacqueline West, a two-time Oscar nominee, most recently for The Curious Case of Benjamin Button, were instrumental in making WATER FOR ELEPHANTS’ Benzini Bros. look unlike any other fictional big screen circus.

Filming began on May 20, 2010 and wrapped up on August 4, 2010. This is the second time Witherspoon and Pattinson have costarred together as they had filmed a deleted scene from 2004’s Vanity Fair in which he was her estranged son.