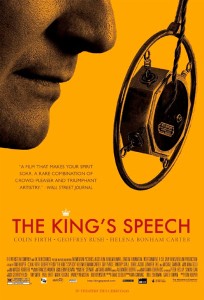 The King’s Speech is the story of King George VI of Britain, his impromptu ascension to the throne and the speech therapist who helped the unsure monarch become worthy of it.

The film stars Colin Firth as King George VI and Geoffrey Rush as speech therapist Lionel Logue, who helped George VI overcome a stammer. Filming commenced in the United Kingdom in November 2009. The film was given a limited release in the United States on 26 November 2010 before giving it a wide release on 10 December 2010 and it was given general release across the UK on 7 January 2011. It received 12 Academy Award nominations, including Best Picture, Actor (Firth), Supporting Actor (Rush), Director (Hooper) and Original Screenplay (Seidler).

The film opens as The Prince Albert, Duke of York, son of King George V, prepares to speak at the closing of the 1925 Empire Exhibition at Wembley Stadium, with his wife Elizabeth by his side. His stammering speech visibly unsettles the thousands of listeners in the audience. Albert seeks to overcome his speech impediment, seeing one therapist who suggests smoking as a throat relaxant and reading with seven sterilized marbles in his mouth, claiming the practice cured Demosthenes of his stammer. After nearly choking, he vows to cease any further attempts at rehabilitation.
Behind his back, the Duchess of York meets with Lionel Logue, an Australian speech therapist now living in London, and persuades her husband to attempt Logue’s radical treatments. In their first session, Logue insists on calling the Duke “Bertie” (a pet name used by Albert’s family). He insists that Albert not smoke in his presence and wagers Albert one shilling that he can make him read without a stammer. He convinces Albert to read Hamlet’s “To be, or not to be” soliloquy, while listening to the overture from Mozart’s The Marriage of Figaro on headphones. Logue records Albert’s reading, but convinced that he has stammered throughout, Albert leaves in a huff. Logue offers him the recording as a keepsake.

The King’s Speech started life as a screenplay, when US-based British writer David Seidler  decided to plunge himself into creative work after being diagnosed with cancer. Seidler had himself developed a stammer as a child, due, he believes, to the emotional trauma of the war, which had included the murder of his grandparents during the Holocaust. As a child, Seidler was inspired on finding out that King George VI had overcome a stutter. “Here was a stutterer who was a king and had to give radio speeches where everyone was listening to every syllable he uttered, and yet did so with passion and intensity,” Seidler, now 73, recalled. “I personally knew what a strain that could be, and in my mind he became a very brave man, indeed. It was pointed out to me that here was a fellow stammerer, and look what he was able to achieve, so perhaps there was a future for me.” Seidler’s childhood fascination with the king eventually led him, many years later, to write “The King’s Speech”.

After completing the script and finding himself in remission, he showed it to his wife. She liked the script, but thought it was too caught up in the technical language of film, and suggested he re-write it as a play, in order to force him to focus on the characters. Seidler scrapped his original screenplay and wrote a play from scratch based on his research. After he had completed it, he decided he quite liked it and sent it to a few people for feedback.