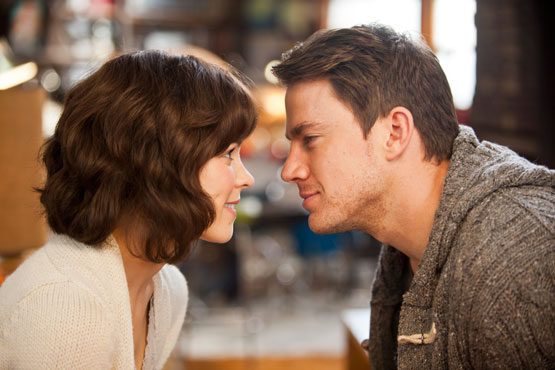 Some of the purses shown in The Vow were designed by Imperfect Indulgence, a Canadian handbag designer

The film is based on a true story about a young woman who loses all recent memory in a car accident and struggles to rebuild her identity. It’s based on the book of the same title, which is the story of Kim and Krickitt Carpenter.

Paige (Rachel McAdams) aand Leo (Channing Tatum) are a happy newlywed couple whose lives are changed by a car accident that puts Paige in a coma. Waking up with severe memory loss, Paige has no memory of Leo, a confusing relationship with her parents (Sam Neill and Jessica Lange), and an ex-fiancé (Scott Speedman) she may still have feelings for. Despite these complications, Leo endeavors to win her heart again and rebuild their marriage.

The Vow was shot in Chicago, Illinois and is rated PG-13 for an accident scene, sexual content, partial nudity and some language.

Enchanted by American country-pop superstar, songwriter Taylor Swift was chosen as the theme song of the movie. We Are by songwriter Joy Williams was featured in a second version of the movie trailer.