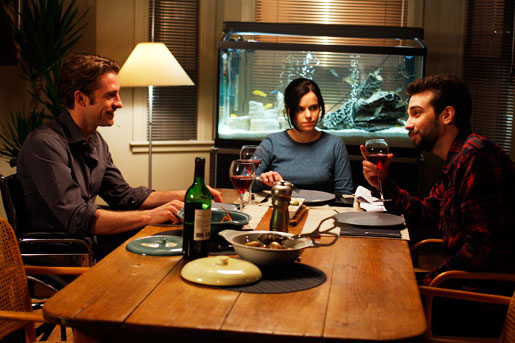 Good Neighbors, a drama film based on the novel Chère voisine, directed and written by Jacob Therney, starring Jay Baruchel, Scott Speedman, Emily Hampshire and Anne-Marie Cadieux is set in the referendum-era Montreal of 1995. 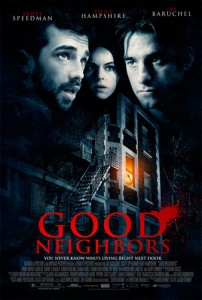 Chrystine Brouillet’s first novel Chère voisine was originally published in 1982. The book, which chronicled the killings of a series of young women and, more particularly, their repercussions on three residents of a Quebec City apartment complex, distinguished itself with its mix of suspense, shocks and satire. Writer-director Jacob Tierney, who initially read Chère voisine in high school, decided to take the material to his father, Montreal producer Kevin Tierney, with whom he last collaborated on the comedy The Trotsky.

The resulting adaptation, rechristened Good Neighbors, recounts the story of the denizen of an urban apartment block, and a serial killer who begins a rampage that has the entire neighborhood rightfully upset. Living above one another on three separate floors, are Spencer (Scott Speedman), wheel-chair bound since the tragic accident some months earlier that left him not only a cripple but a widower as well; Louise (Emily Hampshire), a waitress at a local Chinese restaurant who doesn’t seem to have much interest in anything save her cats (Mozart and Tia Maria), and the newcomer, Victor (Jay Baruchel), an elementary school teacher who has just moved in to complete the film’s central triangle, in what soon becomes not so much a whodunit as a whosgonnagetit.

In writing the screenplay, Jacob Tierney decided to replace the novel’s then-contemporary setting of Quebec City circa 1982, with that of a referendum-era Montreal of 1995. “Science is the death of noir”, the younger Tierney says, regarding his decision to set the film in an era where the Internet and DNA research were not yet widely embraced. He elaborates further on the plight of today’s contemporary thrillers: “If everybody’s got a cell phone, if you even Google something, it’s no fun. It’s no fun! How do you change your passport? You can’t pretend to be somebody else… they know what you look like because you’re on Facebook!”

Juxtaposing his story against the 1995 Quebec referendum, which found the Parti Québécois fighting for a free and independent Quebec (they ultimately lost by a very narrow margin), Jacob Tierney recounts, “That’s when I read the book for the first time. For whatever reason, those two ideas became kind of conflated for me. And I couldn’t really separate them anymore.” In the months leading up to the October referendum, Montreal was covered in posters urging residents to vote either Oui (for separation) or Non. “What’s cool about the referendum, just in terms of signage, is what it articulates visually”, Tierney observes. “Because it’s just yes and no. Just one choice. These are choices that reflect the choices of the character Louise. It’s very simple to her: yes, or no.”