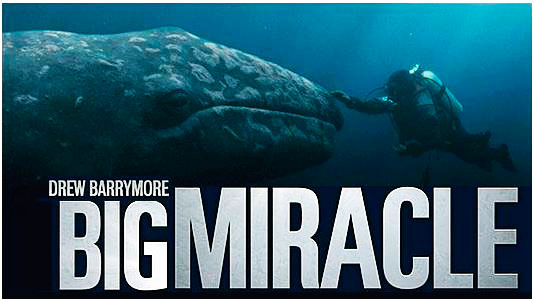 Big Miracle is an romantic drama film starring Drew Barrymore and John Krasinski. The film, directed by Ken Kwapis, is based on the 1989 book Freeing the Whales by Tom Rose, which covers Operation Breakthrough, the 1988 international effort to rescue gray whales from being trapped in ice near Point Barrow, Alaska. 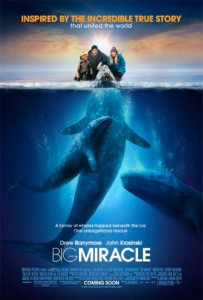 Big Miracle is based on the 1989 book Freeing the Whales: How the Media Created the World’s Greatest Non-Event by Tom Rose, and an episode of Untamed and Uncut which covers Operation Breakthrough.

Inspired by the incredible true story that touched the world, the rescue adventure Big Miracle tells the amazing tale of an animal-loving volunteer (DREW BARRYMORE) and a small-town news reporter (JOHN KRASINSKI) who are joined by a native Alaskan boy (newcomer AHMAOGAK SWEENEY) to rally an entire community—and eventually rival world superpowers—to save a family of majestic gray whales trapped by rapidly forming ice in the Arctic Circle.

Directed by KEN KWAPIS from a screenplay by JACK AMIEL & MICHAEL BEGLER, Big Miracle is based on the book “Freeing the Whales” by journalist THOMAS ROSE.  Anonymous Content’s STEVE GOLIN and MICHAEL SUGAR are joined by Working Title partners TIM BEVAN and ERIC FELLNER as producers.

Director Ken Kwapis, who guided films such as He’s Just Not That Into You and The Sisterhood of the Traveling Pants into big hits, came aboard the project and helped to shape its story line.  “We very much had a satirical media focus in the first drafts,” remembers Amiel.  “Ken brought a vision with him that added a kindness and humanity to the story.  We opened it up and brought in other characters and points of view.”

Like Bonnie Mersinger and Tom Carroll, many other players from the actual events were mirrored in the screenplay.  Casting directors MARY GAIL ARTZ and SHANI GINSBERG began the search to put together just the right group of performers.

True to form, Anchorage-based Greenpeace director Cindy Lowry served as the basis for the script’s activist, Rachel Kramer.  Drew Barrymore was one of the first actors sent a script by Kwapis, with whom she had just worked on the comedy He’s Just Not That Into You.  Although deep into editing her directorial debut, Whip It, she instantly read the work.  Barrymore was the first choice of the filmmakers for the role of this determined animal activist, whose commitment to protecting the environment came at the detriment to her personal life.