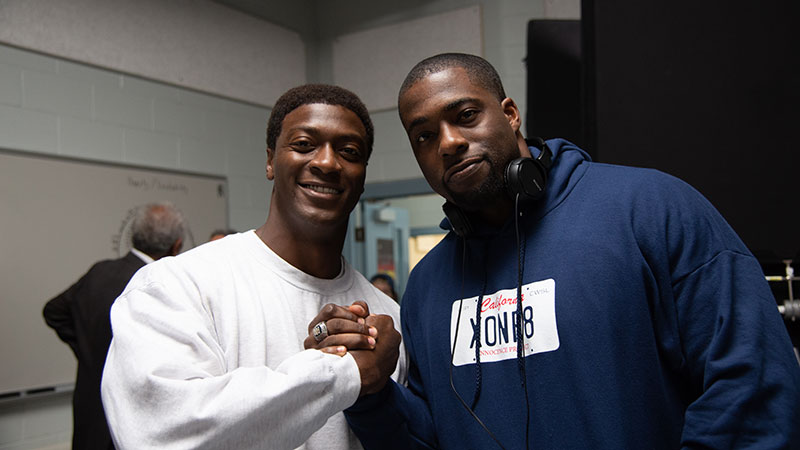 In 2002, high school athlete Brian Banks was falsely accused of rape and kidnapping by a female classmate in Long Beach, California. Although he experienced a real-life nightmare that would have destroyed most other people, Banks survived five years behind bars and another five on probation. His story of perseverance gained widespread media attention in 2012 when he was exonerated with the help of the California Innocence Project. 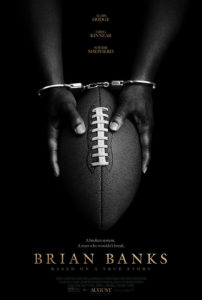 Brian Banks’ presence on set throughout much of the production provided the filmmakers with an
invaluable resource, says director Tom Shadyac. “It was imperative to have Brian there. He was like a walking Wikipedia
on the history and the truth of the story. Whether we were in a courtroom or on a football field, we could turn to him and ask if we were getting things right or if we were missing something.”

Film producer Amy Baer (Last Vegas, Mary Shelley) of Gidden Media saw a news report about Banks’ remarkable case on a Los Angeles TV station and knew instantly it was a story important enough to be shared on the big screen. “Brian’s tale of survival was incredibly compelling,” she says. “Here was a young man trying to reclaim a decade of his life that was stolen from him, and I felt that turning his past into a movie might be a way of transforming that negative moment into a positive one.”

Three years later, “60 Minutes” aired a major report on Banks, which productrice Shivani Rawat (Trumbo, Captain Fantastic) happened to see. Shortly thereafter, Baer met with Rawat and her producing partner Monica Levinson (Danny Collins, Beirut) and asked if they would be interested in developing a feature with her. “I didn’t even let Amy finish before I told her I was in,” says Rawat. “Monica and I really wanted to tell this story with her.”

The three producers traveled to New York to meet with Banks in person, and were each impressed with his indomitable spirit and positivity. “Brian lights up the room when he walks in,” says Levinson. “He just makes you happy, and every time you look at him you think: ‘How can you have gone through such a terrible experience and still be that human right now?’”

To turn Banks’ story into a script, Baer reached out to award-winning screenwriter Doug Atchison. “Amy was aware of a film I’d written and directed called Akeelah and the Bee,” says Atchison. “Curiously enough, Brian actually saw that film while he was in prison. He had the ability to check out DVDs, so he watched it and told me later that it inspired him. Apparently when Amy and her team were talking with him about writers to tell his story, my name came up and he responded positively.”

After signing on to write the script, Atchison met with Banks and discussed the events surrounding his wrongful incarceration. “Hearing this young man talk about what had happened to him in solitary confinement, and how he was able to get through it, really drew me in. He’d been waiting years to tell this story in its entirety, and that’s what he did. He told me about his whole life.”

In the film’s title role, award-winning actor Aldis Hodge (Hidden Figures, Straight Outta Compton) delivers a performance of rare insight and depth, due in large part to the emotional bond he felt with Banks. “I knew instantly that this would be a special project for me because I really connected with the story and the character,” says Hodge. “Something about the way Doug wrote it just sparked my attention.”

Hodge admits to being nervous going into his first audition because of how badly he wanted the role. “Then about a week later, they asked me to come in again and meet with Tom Shadyac,” he recalls. “It was actually more of a discussion about who I was as a person. Tom really wanted to learn about me because he was searching for an element of synergy between Brian and the actor cast to portray him.”

Between that first and second audition, Hodge hit the gym and began bulking up. “I knew if I wanted this job I’d have to be prepared for it,” he says. “So, when Tom finally saw me, he said, ‘Man, you put on some weight!’ I think he respected the fact that I was showing him I was ready to do the work.”

Banks was working for the National Football League at the time, so the two men met at an NFL office in New York to talk things over. “It wasn’t football season, so we had this big conference room all to ourselves,” Atchison explains. “I brought my camera with me and recorded about 13 hours of Brian telling me his life story, from beginning to end. It was my job to ask the right questions in order to extract all the facts of what happened and how he felt about it.”

Banks says he agreed to have his life made into a feature film because he’s committed to helping others who are struggling in a similar situation. “By telling my story in this movie, I hope that we can prevent, or at least minimize, wrongful convictions from continuing to happen in the future. The truth is that wrongful convictions and social injustices don’t receive the recognition they should. Too often, it’s out of sight, out of mind. If we don’t talk about it, people won’t ever get engaged enough to do something about it.”