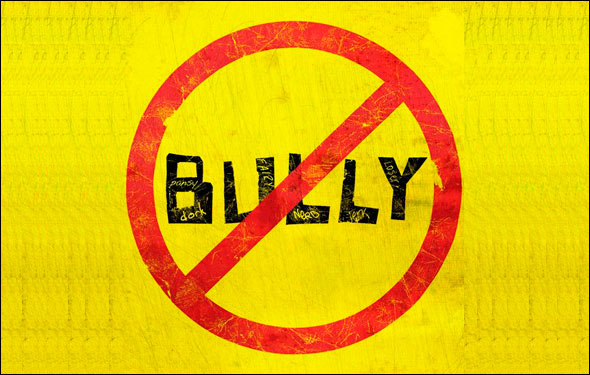 Bully (originally titled The Bully Project) is a documentary film about Bullying in U.S. schools. Directed by Lee Hirsch, the film follows the lives of five students who face Bullying on a daily basis. Bully premiered at the 2011 Tribeca Film Festival. It was also screened at the Hot Docs Canadian International Documentary Festival and the LA Film Festival.

On February 27, 2012, Katy Butler of Ann Arbor, Michigan created a Change.org online petition to the CEO of the MPAA in order to reduce Bully’s rating from R to PG-13. As a former victim of bullying, Katy states that ” Because of the R rating, most kids won’t get to see this film

Bully had its global premiere at Italy’s Ischia Film Festival on July 17, 2011. Bully was acquired by The Weinstein Company immediately after its premiere at Tribeca Film Festival. The film will be released in U.S. theatres on March 30, 2012.

Over 13 million American kids will be bullied this year, making it the most common form of violence experienced by young people in the nation. The documentary film Bully, directed by Sundance and Emmy-award winning filmmaker Lee Hirsch, brings human scale to this startling statistic, offering an intimate, unflinching look at how Bullying has touched five kids and their families.

At the heart of the documentary, Bully, are those with huge stakes in this issue whose stories each represent a different facet of America’s Bullying crisis. Filmed over the course of the 2009/2010 school year, Bully opens a window onto the pained and often endangered lives of bullied kids, revealing a problem that transcends geographic, racial, ethnic and economic borders. It documents the responses of teachers and administrators to aggressive behaviours that defy “kids will be kids” clichés, and it captures a growing movement among parents and youths to change how Bullying is handled in schools, in communities and in society as a whole.

Hirsch was a victim of Bullying as a child and decided to make a documentary so that the hidden lives of bullied children would be brought into the open. He approached the non-profit organization Fractured Atlas which gave him partial funding for the film. Significant additional funding was provided by Sundance Institute Documentary Fund, The Fledgling Fund, BeCause Foundation and Gravity Films. The film’s music was composed by Ion Michael Furjanic (former member of the band Force Theory) and indie band Bishop Allen.

In a screening in Minneapolis in September 2011, Hirsch told the audience that he, himself, had been bullied, and that was part of the inspiration for the film, and for the direction he took it. In an interview with a Twin Cities Jewish news website after the screening Hirsch continued: “I felt that the hardest part of being bullied was communicating,” Hirsch said. “And getting help. I couldn’t enroll people’s support. People would say things like ‘get over it,’ even my own father and mother. They weren’t with me. That was a big part of my wanting to make the film. It’s cathartic on a daily basis.” Hirsch said he hoped the film grows far beyond him, inspiring advocacy, engagement, and empowerment not just in people who are being bullied and in their families, but by those of us who all too often stand by and do nothing. He stated, “I hope we build something that’s really sustainable. I hope this takes on a life of its own.”

The movie got an R rating from the Motion Picture Association of America. On February 27, 2012, Katy Butler of Ann Arbor, Michigan created a Change.org online petition to the CEO of the MPAA in order to reduce the movie’s rating from R to PG-13. As a former victim of Bullying, Katy states that ” Because of the R rating, most kids won’t get to see this film. No one under 17 will be allowed to see the movie, and the film won’t be allowed to be screened in American middle schools or high schools.” As of March 3, 2012, the petition has garnered over 190,000 signatures. Common Sense Media disagreed with the rating, recommending the film to mature teens thirteen and older.

As of March 7, 2012, Butler had collected more than 200,000 signatures, but she says the Motion Picture Association of America doesn’t want to make the change. Joan Graves of the MPAA says that though Bully is a “wonderful film,” the organization’s primary responsibility is to provide information to parents about films’ content.