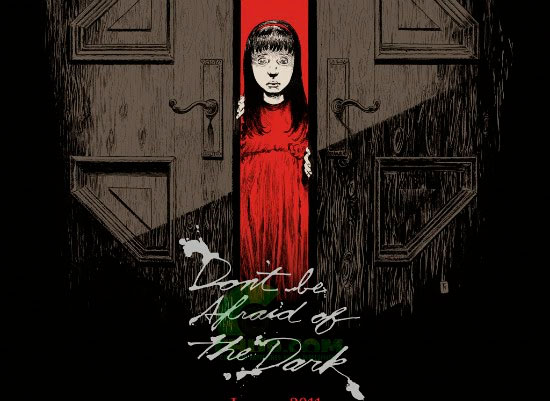 Don’t Be Afraid of the Dark is a 2011 American horror film written by Matthew Robbins and Guillermo del Toro and directed by comic book artist Troy Nixey. It is a remake of the 1973 ABC made-for-television horror film of the same name. 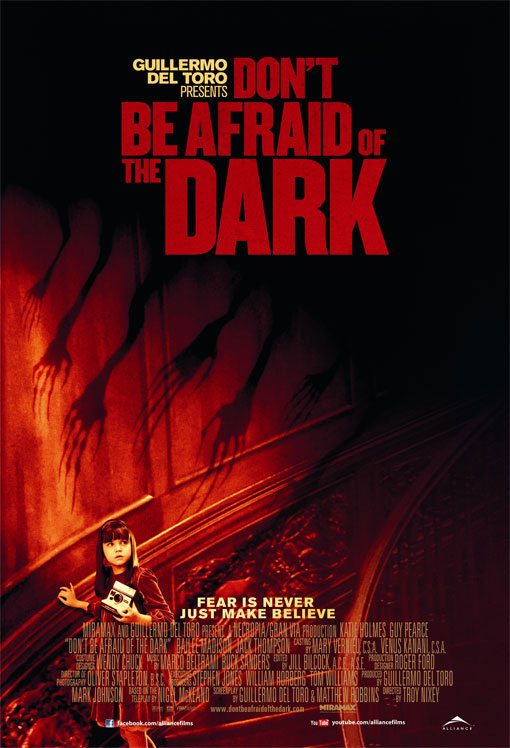 Due to the sale of Miramax by Disney, the Don’t Be Afraid of the Dark film release was put on hold until the sale was finalized

A young girl, Sally Hirst (Bailee Madison), moves in with her father Alex (Guy Pearce) and his girlfriend Kim (Katie Holmes). Her father is renovating the house they live in, which he hopes to sell. Due to the fact that her mother recently abandoned her, Sally has become a distant child. Although Kim tries to befriend her, Sally frequently alienates herself from her.

One day, Sally finds a hidden basement with a sealed fireplace. She finds herself drawn toward the fireplace, as she can hear voices that beg her to open it, promising friendship. Her father stops her before she can get the door completely open, but small goblin-like creatures escape, and begin to torment Sally at night.

This picture, which was developed with Miramax but in the wake of the division’s closure will be released by FilmDistrict, was rated R despite filmmaker ambitions to the contrary.”We originally thought we could shoot it as PG-13 without compromising the scares,” Del Toro said. “And then the MPAA came back and gave us a badge of honor. They gave us an R for ‘pervasive scariness.’ We asked them if there’s anything we could do, and they said, ‘Why ruin a perfectly scary movie?‘”

Don’t Be Afraid of the Dark was rated R by the MPAA for violence and terror.

Troy Nixey narrated the film at a screening at the 2010 San Diego Comic-Con International. The initial release date was scheduled for January 21, 2011 and a trailer was attached to The Last Exorcism, Devil and Let Me In during 2010.