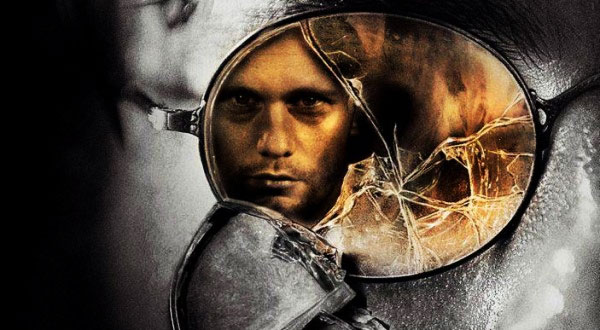 Straw Dogs is a 2011 American thriller film directed, produced, and written by Rod Lurie, produced by Marc Frydman. It is a remake of Sam Peckinpah’s 1971 film of the same name, in turn based on the Gordon Williams novel The Siege of Trencher’s Farm. The dramatic movie stars James Marsden, Kate Bosworth, Alexander Skarsgard, Dominic Purcell, Laz Alonso, Willa Holland, and James Woods. 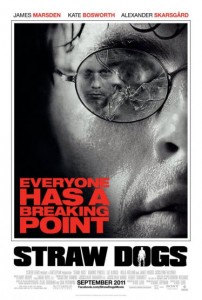 Rod Lurie wrote and directed the remake of Straw Dogs which was scheduled for release on February 25, 2011. However the date was pushed to September 16, 2011.

Straw Dogs: Taken from the classic Chinese text, Tao Te Ching, likening the human condition to that of an ancient Chinese ceremonial straw dog. The dogs, which were made from straw, were used as offering to gods in ancient Chinese rituals and treated with the utmost reverence, only to be trampled on and tossed aside when no longer needed.

When everything you’ve lived for is under siege, what would you do? How far would you go?

It’s a question made terrifyingly apparent to Hollywood screenwriter David Sumner (James Marsden) and his actress wife Amy (Kate Bosworth) when they move to her small hometown in the Deep South after her father’s death. Smiling faces, warm welcomes and what were once comfortable old relationships take on a sinister tinge for David and Amy, who find themselves driven to a crisis-laden brink in Screen Gems’ frightening reimagining of the classic 1971 film “Straw Dogs.”

The suspenseful, gut-wrenching and intensely cathartic new version brings the original story to the present-day American South, and sets it against a backdrop of small town life where everyone knows too much about each other, the town hierarchy is determined by your place within the ranks of the high school football team and the performance of the football team at Friday night’s game determines the fates of many.

David and Amy’s plan is to prepare for sale the family home, which has fallen into disrepair, and for David to take advantage of the quiet and solitude to complete the screenplay he’s working on.

But all is not as bucolic as it seems in Blackwater, Mississippi, and the arrival of the Sumners stirs up long-dormant resentments and suspicious actions. Once there, Amy slips back into being the hometown celebrity, which leaves David feeling out of touch with his wife and questioning her behavior. Meanwhile, tensions build in their marriage and old conflicts re-emerge with the locals, most notably with Amy’s ex-boyfriend Charlie (Alexander Skarsgard), who, along with his fellow former football teammates Bic (Drew Powell), Norman (Rhys Coiro) and Chris (Billy Lush) push the limits of David’s tolerance and the Sumners’ marriage, forcing them to re-evaluate each other and their relationship.

When the daughter of the former football coach Tom Heddon (James Woods) goes missing, her father takes the law into his own hands, enlisting Charlie and his boys to help him search for her and setting into motion a series of events that ultimately leads to an explosively violent confrontation, escalating to a shocking, catastrophic climax that will shatter the lives of everyone involved.

The 1971 release starred Dustin Hoffman and Susan George and was written and directed by Sam Peckinpah. David Zaleg Goodman also has a writing credit on the original’s screenplay and both films are based on the book, The Siege at Trencher’s Farm by Gordon Williams.

Straw Dogs has been rated R by the MPAA for the following reasons: strong brutal violence including a sexual attack, menace, some sexual content, and pervasive language.