Thor is an American superhero film based on the comic book of the same name appearing in Marvel Comics. It is the fourth film to be released in the Marvel Cinematic Universe. The film will star Chris Hemsworth, Tom Hiddleston, Natalie Portman, Jaimie Alexander and Anthony Hopkins with Kenneth Branagh directing a script by Mark Protosevich, Ashley Miller, Zack Stentz and Don Payne. 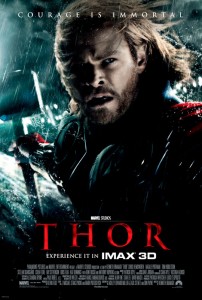 The powerful but arrogant warrior Thor is cast out of the fantastic realm of Asgard and sent to live amongst humans on Earth, where he soon becomes one of their finest defenders.

The project of a film adaptation of Thor was in development hell for several years before Marvel Studios signed Protosevich to write its script in 2006. Matthew Vaughn was to direct the film in late 2008. Branagh replaced Vaughn in late 2008. The main characters were cast in 2009 and principal photography took place from January–May 2010. Thor is also to be released in 3D.

Thor spans the Marvel Universe; from present day Earth to the realm of Asgard. At the center of the story is The Mighty Thor, a powerful but arrogant warrior whose reckless actions reignite an ancient war. Thor is cast down to Earth and forced to live among humans as punishment. Once here, Thor learns what it takes to be a true hero when the most dangerous villain of his world sends the darkest forces of Asgard to invade Earth. Kenneth Branagh directs this fantasy epic. Expect to see agents of S.H.I.E.L.D., previously seen in ”Iron Man,” to make an appearance, further forshadowing the coming of The Avengers!

The cast for Thor: Chris Hemsworth as Thor, Natalie Portman plays Jane Foster,a scientist and Thor’s love interest. Tom Hiddleston as Loki, Thor’s adoptive brother and nemesis and there’s Anthony Hopkins as Odin, the ruler of Asgard, father of Thor, and adoptive father of Loki. Rene Russo is Frigga, the wife of Odin, queen of Asgard, step mother of Thor and the adoptive mother of Loki. Stellan Skarsgard as professor Andrews which is a scientist doing research in New Mexico who encounters Thor. Jaimie Alexander as Sif,which is a warrior and Thor’s childhood friend and Kat Dennings as Darcy who is a co-worker of Jane Foster. Ray Stevenson is in the role of Volstagg, the comic relief of the Warriors Three known for both his hearty appetite and wide girth and Josh Dallas as Fandral who is the leader of the Warriors Three, a group of three Asgardian adventurers who are among Thor’s closest comrades.

Tadanobu Asano as Hogun, one of the Warriors Three, primarily characterized by his grim demeanor and the only member who is not an Æsir. Idris Elba is Heimdall, the all-seeing, all-hearing Asgardian sentry of the bifröst bridge,  Colm Feore as Ymir, king of the Frost Giants. Adriana Barraza has been cast in an unknown role though is said to be a human. Clark Gregg will reprise his role as S.H.I.E.L.D. agent Phil Coulson from Iron Man and Iron Man 2. Actors Joseph Gatt, Joshua Cox, and Troy Brenna have also been cast in unspecified roles. Joseph Gatt said he will be playing a villain “with a lot of action”. Stan Lee and J. Michael Straczynski will have cameo appearances.

Sam Raimi originally envisioned the idea for Thor after Darkman (1990), meeting Stan Lee and pitching the concept to 20th Century Fox, but they did not understand it. Thor was abandoned until April 1997, when Marvel Studios was beginning to rapidly expand. The film first gained momentum after the successful release of the film X-Men. The plan was for the film to be made for TV. UPN was in talks for airing it; excited by the prospect, they pushed for a script and approached Tyler Mane to lead as Thor. In May 2000, Marvel Studios brought Artisan Entertainment to help finance it as a film, but Thor was still laboring in development hell by April 2002, and in June 2004 the project still had yet to be optioned by a studio. However, Sony Pictures Entertainment purchased the film rights, and in December 2004 David S. Goyer was in negotiations to write and direct. In 2005, though there were talks between Goyer and Marvel, it was revealed that Goyer was no longer attached, though at this point the film was still set to be distributed through Sony Pictures.