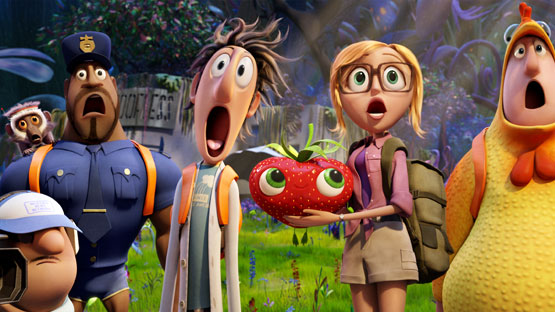 Cloudy with a Chance of Meatballs 2 picks up where Sony Pictures Animation’s mouth-watering comedy left off. Inventor Flint Lockwood thought he saved the world when he destroyed his most infamous invention — a machine that turned water into food causing cheeseburger rain and spaghetti tornadoes. But Flint soon learns that his invention survived and is now creating food-animals – “foodimals!” 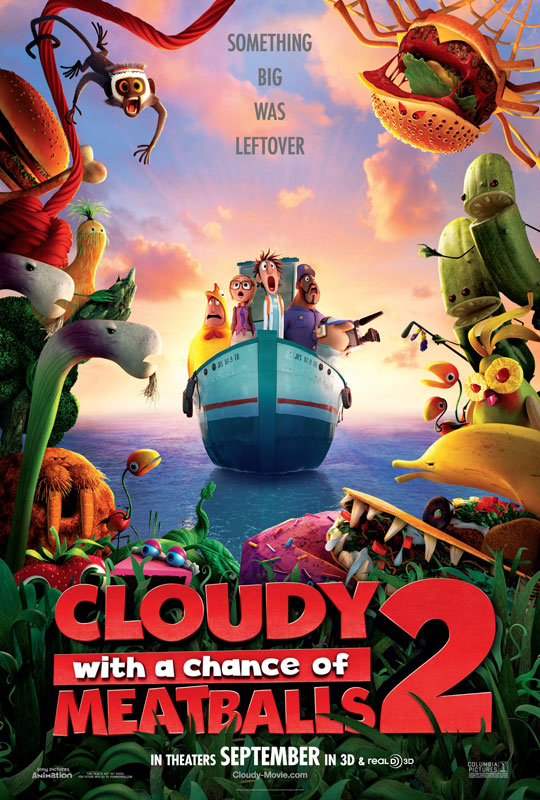 The animators create a performance for the characters on the screen, so each character has a unique way of moving and emoting. The senior animation supervisor, Peter Nash, oversees the team that tackles that challenge.

“It’s great to be back in the spray-on shoes of Flint Lockwood,” says Bill Hader. “In fact, it seems like I never left him behind – every month or so, I get to come into the booth and do Flint’s voice for a bit. I love it.”

“I love the world of Cloudy,” says Cody Cameron, who directs the film with Kris Pearn. A story board artist on the first three Shrek films, as well as the Sony Pictures Animation films Surf’s Up, Cloudy with a Chance of Meatballs, Open Season 2, Open Season 3, and the short film The Chubbchubbs Save Xmas – the last two as director – Cameron says, “Of all the films I’ve worked on, Cloudy is my favorite. So to get the chance to go back and revisit the characters in this new, crazy world that we were developing made this a really exciting project for me.”

Once it was decided that the movie would be about the foodimals, it was clear that the sequel would be bringing all of the favorite characters from the first film back together. “Flint’s trip back to the island is supposed to be a secret, but we know Flint can’t keep a secret. He blurts it out right away to Sam, and she says, ‘You can’t do this alone.’ And before you know it, they’re getting the gang back together,” says Pearn.

For the end credits, the filmmakers wanted to do something a little different – something that would express the spirit of the film and show off a little personality. So, how about a sequence that moved beyond a traditional 2D end-credits sequence – one that employs 2D flash animation, CG animation, stop-motion, puppets, and more in a wild, fun sequence that brings the foodimals to life in all kinds of new ways?